Costume and Clothing as a Cultural Index on Darkover 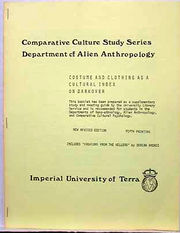 Costume and Clothing as a Cultural Index on Darkover is a 20-page fan publication which was "written and illustrated by Diana L. Paxson in close collaboration with Marion Zimmer Bradley.

It has a copyright date of July 1977, and the third edition is marked as a revised printing and undated (probably 1979).

It was later translated into German and published as a separate issue of Sternenkristall.

It includes a note that "Portions of this booklet previously appeared in the Friends of Darkover Leaflet #1, June, 1975". To make things more confusing: it is called "Thendara House Publication #2." In the end, there are five editions, the first two do not contain the supplement, "Fashions from the Hellers," which was added in January 1979. The 1981 "New Revised Edition -- Fifth Printing" includes a statement "New Material Copyright February, 1981" and includes two additional articles titled "Drytown Men's Clothing" and "Drytown Women's Clothing" not in earlier editions. (Total length of this edition was 30 pages + covers.)

The leaflet version was half as long and did not have the illustrations by Diana Paxson. From an add in 1977:

Back in June 1975, before there was a regular Newsletter, before the Friends had their own PO Box, MZB and Diana Paxson published the first leaflet for the then small group, COSTUME AND CLOTHING AS A CULTURAL INDEX ON DARKOVER. Only about 100 were printed, and the booklet went out of print many months ago, though we still continue to get requests for copies. That booklet marked the first publication of THENDARA HOUSE, an emphatically nonprofit hobby press run by MZB and Walter Breen, with a little help from the Friends, though it did not bear the colophon.... Greatly expanded revised edition of COSTUME AND CLOTHING AS A CULTURAL INDEX ON DARKOVER; which could have been subtitled, EVERYTHING YOU ALWAYS WANTED TO KNOW ABOUT DARKOVAN COSTUMES BUT WERE AFRAID TO ASK. The text has been almost doubled in length, and there are many additional illustrations by Diana Paxson. This one, also, is available at $1.50 per copy." [1]

Fashions from the Hellers

Later editions included a section called "Fashions from the Hellers", which was drawn (with sketchy notes) by Jane Sibley. This was a supplement printed for Friends of Darkover "Midwinter Festival" and Grand Council Meeting in Berkeley, California, January 27, 1979.

"This booklet has been prepared as a supplementary study and readying guide by the University Literary Service and is recommended for students in the Departments of Xeno-ethnology, Alien Anthology, and Comparative Cultural Psychology." [2]

"A pamphlet in the Department of Alien Anthropology from the Imperial University of Terra, written and lavishly illustrated by Diana Paxson, in close collaboration with MZB. Our best-selling title -- it just went back to the printer for a Third Edition! Many costumes have been constructed from this book."[3]