From Fanlore
(Redirected from Subreality Cafe)
Jump to: navigation, search

Subreality Café was a shared universe where characters--original and canon--took time off and interacted with one another, and their authors. A Subreality Café message board was hosted by CFAN, where many comic fic writers were "regulars." The universe was originally created by Kielle, but spread widely, with 198 authors archived at Subreality Central.

Q: "Subreality Hopscotch." What started that? Just from that one story, there's an entire new world.

Kielle: Yeah, and that idea stuck with me. Later, I was working on CFAN and I was doing the "stories by character" page. I just finished Wolverine, and I just got this crazy idea, what if Wolverine knew he was [in] a story? What would he think about being in all these stories? I wrote it as a joke, what if Wolverine remembered [being in] all these stories, and didn't like it? I did that, and it sort of went from there. Someone else came up with the idea of having him stopping off in a bar; they didn't name it though. I checked it. I was already thinking about an idea like that and I thought, "I'd better write fast before he [Bones] did it." So I named it [the Subreality Café] and I wrote a story… the round robins started on a regular round robin board on FicWorld. A lot of people started writing Subreality Café Round Robins; there were so many of them that the regulars got pissed and [kicked them out]. [1] 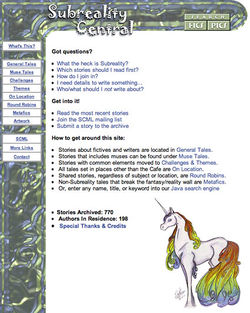