While it was not the FIRST zine to include Star Wars material, it was very, very close. See Some Star Wars Zine Firsts. 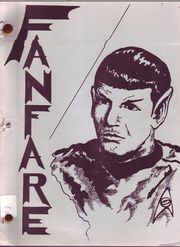 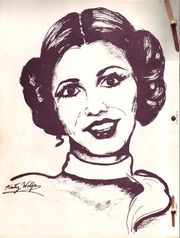 back cover of issue #1, Katy Wolfe

Fanfare 1 was published in December 1977 (second printing: May 1978) and contains 102 pages. The front and back covers are by Katy Wolfe. The other illos are by Leon Hayes. All but one story is by Candace A. Wiggins. The majority are Star Trek: TOS stories.

See reactions and reviews for The Lost Boy.

[zine]: All but one of the stories in this zine are by the editor. These early efforts have some interesting premises but the execution is generally middling. 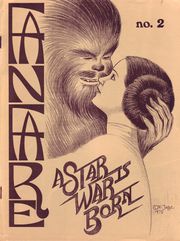 The majority are Star Trek: TOS stories. The front cover is by Ron Juge, and the back cover is by Katy Wolfe. The interior illos are by Katy Wolf, C.A. Wiggins, and Leon Hayes.

Synopsis of "The Captive":

Mela Vader, aged eleven, has been summoned to her father's home in the far-away town of Abba. Retrieved from school by Jemin Didaka, Lord Vader's androgynous bodyguard, she is told to ignore his erratic behaviour. Later, she is told by Jemin that Darth was recently abducted by 'rebels at the Impirical base where he was serving. Sedated and drugged to the point of overdose, his system has been poisoned by psycho-hallucigenic 'mindbenders'. Admonished to help her father by being a 'good girl,' Mela helps him more than any of them would have guessed. One night, suffering a flashback, Vader calls to his bodyguard who does not hear or go to him. Instead, it is Mala who hears and goes to Vader's room, administering necessary medication. She also sees the face behind the mask Vader constantly wears. The next morning, Vader informs Jemin he has sent Governor Tarkin his resignation from Imperical service. Astonished, Jemin says, "I can imagine how Tarkin will react to this news," fearing what can and will happen when the governor receives this resignation. When he sees Vader's new, softer manner with Mela, however, Jemin hopes any emotional scenes can and will be avoided. 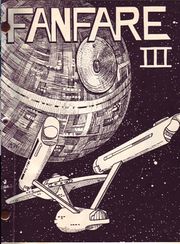 Fanfare 3 was published in 1982. It contains 126 pages and fiction from Star Trek: TOS, Star Wars and Indiana Jones.

From the editorial by Wiggins:

BEADS AND RATTLES will be back and concluded in our next issue, FANFARE FOUR THE COMMON MAN; and THE CADETS, by Jody Crouse, a Trek story will be in that issue as well, rather than be in this issue.

Ignore the glaring typo in A TREMOR IN THE FORCE. I typed it at four in the morning and my mind or my eyes -- perhaps both — were no longer working as well as they had earlier in the day. Say around two in the morning --

My special thanks go to Tia Nichols for hours of painstaking, as well as backbreaking, work. I also want to thank her for introducing me to the fun of CROSS-DRESSING. If anyone had ever told me that one day I would be going to media SF&F cons dressed as an Orthodox rabbi ...(let alone going as a debonair but deadly French archeologist ... let alone going (NEXT YEAR) as a male replicate with a white and spiked 'do ... well, it was time for a new hairstyle, anyway. Besides, wigs are Too Expensive ...) Well, I wouldn't have believed them.

I hope you enjoy this issue and that you will write us or Tia or me ... I'm not finicky ... and let us hear about it if you especially liked it.

Well, it's Wednesday 9 p.m. Please excuse me, my suitcase is waiting.

From the editorial by Nichols:

I want to mention (Shee-it, what an ego) I debut in this issue as an artist with two illos. Never done this before, folks, but I'm rather pleased with m'first attempt. True, I'm no Martynn or Joni Wagner, but maybe... one day. Okay, okay, I'm through with my own back patting.

Read on and enjoy.

I'm gonna relax and celebrate the finish of this sucker zine by attending a con -- Mediawest II -- here we come.