Captain Uhura was published in February 1979 and is 106 pages long. It is a Probe Special Issue. 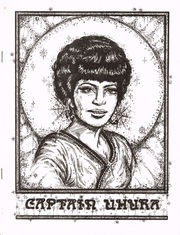 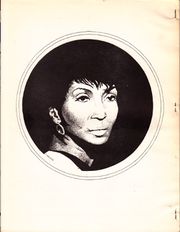 There are three Probe Special Issues:

Captain Uhura, the sequel to 'Goddess Uhura,' premiered exactly three years ago this month at the last of the New York Star Trek conventions to be hosted by the original Star Trek Con Committee. We sold eighty-five copies of Goddess during the last four days of that con [which is where it was collated], which in those days, was a very big deal. We found ourselves going into a second 200-copy printing within four months. The seeds for a sequel to Goddess were planted in my brain sometime during this 'boom period,' but did not stir to life until the BiCentennial-Ten Con (New York, September 1976), when I saw the Trek paintings of Paul Rivoche. The two reprinted here inspired 'Nova Gang,' plus the idea of Uhura attaining Captaincy of a dreadnought. Other vague ideas for short stories began to crystalize and fall into line behind 'Nova Gang,' and soon the idea for an episodic novel was born. However, I had no idea it would be a very loooong two and a half years before 'Captain Uhura' would be finished.

The Rocky Road to Publication

The editor issued several personal statements that explain some of the troubles this zine has been:

This issue [[[Probe]] #12] has no advertisement for CAPTAIN UHURA because of several reasons.

1 -- Lately our readers have been getting tired of seeing "Coming Soon..." ads, and have started getting impatient.
2 -- A lot of personal upheavals in the past few months [1] have delayed CAPTAIN UHURA, to a point where even I am asking when it will finally see the light of day.
3 -- Even if CU were finished and on its way to the printers, we would need 200 orders sent to us, in order to pay the bill. And even though almost 400 copies of GODDESS UHURA have been sold, and we have been advertising CAPTAIN for over a year, we have received only 123 SASEs.

Work on the novel will resume shortly. But the source of funding this operation is in the hands of the readers. [2]

Mpingo Press and I have both been going through a lot of problems lately. 'Captain Uhura' was finally completed and delivered to the printers at 2 AM on the first morning of Space Expo (FebCon '79). Reaching that deadline cost all of Mpingo Press' resources and all of my personal savings. On top of that, [attending] the convention was a financial disaster for both me and the press, followed by [details of personal problems redacted]. The pre-ordered copies of 'Captain Uhura' and present orders of MP zines will be mailed as soon as I have the resources with which to do so. I thank all of Mpingo Press' customers for their patience up to this point. [3]

This is a set of interrelated stories focussing on Commander Uhura's adventures serving with Captain Rendovi as first officer of the dreadnought Dominion. (None of the other TOS characters appear except Kirk, briefly.) It takes place within a Starfleet that refuses to allow women to captain starships, and the unifying storyline is that of a conspiracy working - unbeknownst to our heroine - to force Starfleet to give her command of the Dominion. Though I did not care for the conspiracy plotline, the stories remain enjoyable...

Howlett is one of the best portrayers of strong, authentic women characters in fan fiction, and here he continues he epic of the rise of Communications Officer Uhura to captain of her own ship, in a series of episodes showing her coping with command problems with intelligence, control, courage, and wry humor. In the best, and initial, episode, she has charge of a landing party, rescuing the inhabitants of a planet doomed to incineration, and searching for a mysterious V.I.P. who turns out to be more dangerous than the approaching nova. In other tales, she falls literally 'into the drink,' is pursued by some very unparadisical inhabitants of 'Eden.' and fights the seeming ghost of the lost Defiant. The stories are taut and fast moving, the prose lean and professional. Uhura's portrayal is excellent; only when the writer gets involved in an examination of woman's inequalities does his protagonist begin to lose her three dimensions and sometimes moves like a puppet in the interests of protesting male domination. But it's a minor caveat, and one which may seem a virtue to the women equally enthused on liberation. It's definitely the best zine I've seen this year, beautifully printed in large type, excellently illustrated, and modestly priced. Definitely recommended to everyone! [5]

This zine consists of four long stories and three interludes, detailing what happens to Uhura after she is given the chance to return to Star Fleet Academy to enter the command track, graduating as First Officer on a dreadnought. How her career progresses and why form the interwoven narrative that ties the whole zine into a novella. As a woman this zine made me very angry both times I read it, with its condescending assumption that 200 years from now women will still have to sleep around to buy career favors from all-powerful males — but I had to keep reminding myself that everything in the 60's episodes lends credence to this expectation. But a woman killing herself with her sharp fingernails? Come now! Active women do not wear claws, can't afford to. In neither of these cases is the woman Uhura, fortunately, but she is closely involved in both. Actually Uhura does not achieve captaincy until the last couple of pages of the story, and all her promotions come about through the good offices of a close woman friend up the chain of command, whom she betrays callously towards the end.

I won't say this zine is 100% anti-feminist, but do believe enjoyment or irritation depends on the gender of the reader. Considering his previous admiration for the character, I must say I am mildly surprised to find any Uhura-story from Mr. Howlett taking this form. [6]