You may be looking for Millennium Trek.

It was the first zine published by the club after the departure of Warped Space. 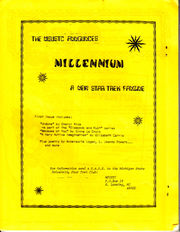 Millennium 1 was published in March 1977 and contains 70 pages. An ad in Scuttlebutt #1 says "contains part of the 'Diamonds and Rust' series."

There is absolutely nothing memorable in this first issue by the Club since Warped Space pulled out, save for the Diamonds & Rust chapter, Undone by Cheryl Rice. The other material can't begin to come up to it, some even more suitable for a free club zine. In art, Gee Moaven, Marty Siegrist, and new artist Pat Wood stand out among other drawings that just miss looking like the characters they were aimed for. Poetry is fair. Good cover drawing, well bound, secure, adequate layout, easy to read. A promising future. [1]

Millennium 2 (aka "Second Millennium") was published in August 1977 and contains 70 pages. The art is by Marty Siegrist, Pat Thompson, Joni Wagner, and Kim Blekis. 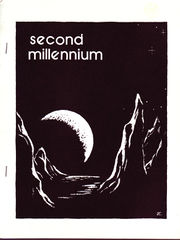 cover of issue #2, Marty Siegrist, from an idea by Dennis Tabaczewski

Millennium 3 (aka "Third Millennium") was published in May 1980 and contains 56 pages. It features artwork by Kathi Higley, Connie Sever and Marty Siegrist.

This issue focuses mostly on Spock and what aliens are once more doing to him. 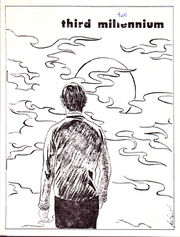 Millennium 4 (aka "Fourth Millennium") was published in May 1981 and contains 54 pages. 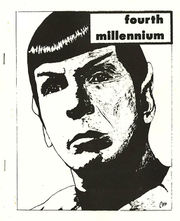