You may be looking for the zine ...A Handful of Snowflakes and Other Trek Tales. 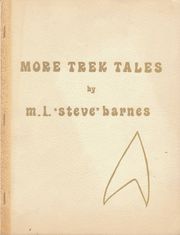 More Trek Tales is a Star Trek: TOS gen and het fanzine. It is 79 pages long.

It is not related to Trek Tales, a zine published by Unicorn Press.

[Heat Wave]: McCoy grapples with a deadly disease, ill-tempers generated by his treatment with raising the heat on the ship, and his love/lust for Barrows which he refuses to believe is reciprocated despite Kirk's attempts to egg him on. He solves the medical problem by once again using himself as guinea pig, and Barrows' reaction finally convinces him he's not too old, after all. Cute, but not scintillating. [To Seek the Sun]: Spock and Uhura investigate a ship that denies having sent a distress call, and end up among the drugged captives of androids "protecting" their masters. Interesting twist on this premise - the androids really are assisting the people by starving them, eking out provisions to a delayed planetfall. [The Wind Born]: In order to retrieve an important, wounded scientist and protect mining rights, one of the Three must go out to meet the dreadful Wanti beast, god of the locals, to prove their right to the scientist (the Klingons go second) in trial-by-survival. So, of course they bicker over the choice; this time it is Spock who knocks Kirk out and takes the role of sacrifice. The plot's a tad contrived, but the character play is quite fine. Best of show. [The Parting]: Vignette of Sarek & Amanda on the eve of Spock's departure. [1]

[zine]: I was very pleased and happy with Steve Barnes' extraordinary fanzine. A couple of bad points, though. One is the print. On some pages it was difficult to read. The second is the typographical errors. However there are good points. The binding is excellent; the artwork fair to good; the covers are good. The quotes under the pictures beginning each story is a very nice touch.

"Heat Wave" is a McCoy/Barrows romance story. What was started in the episode "Shore Leave 8 is finished on board the good ship ENTERPRISE. McCoy believes that he is too old, but Tonia Barrows convinces him otherwise. I found myself giggling at the end of this one.

"To Seek the Sun", A new story with Uhura and Spock paired up. Fascinating. Both of the characters are strong. Uhura is both crewman and woman, not an overabundance of one. They find themselves on a vessel where technology has taken over in a strange new twist.

"The-Wind Born", Spine-tingling adventure starring our terrific trio Kirk, Spock, and McCoy, Kirk needs to remove an injured man, who is important, but can't until he proves he is telling the truth. He must battle a wanti to the death. If that doesn't kill him, the Klingons, also trying to prove that the man is theirs, probably will. Good climax, excellent character interplay, strong characters. One question — What if both men fail??

"The Parting", a close, touching story which answers questions about Spock*s leaving home. Sarek is explored in depth and is fascinating. Very effective ending. [2]

[zine]: This second ish in the series of zines spotlighting Steve Barnes is, I'm sorry to say NOT as good as the first. The four stories are easy to read and inoffensive, yet they never seem to arouse real interest or active involvement on the reader's part. The situations presented and the stock characters are thoroughly familiar. TOO much so, unluckily, as some of the themes used (McCoy cures disease and gets a girl; Spock leaves Vulcan and his misunderstanding father) have been picked to the marrow. [3]

[zine]: The first story was too bland for Steve's style. Plot was old hat and the relationship between McCoy and Tonia wasn't developed enough. There were way too many typos; they are very distracting. I enjoyed the 'zine though. [4]