The paper doll set was first advertised, along with the Kirk Enslaved poster, in the July/August 1979 issue of Scuttlebutt.

The dolls were 9 inches tall. The set includes 75 pieces and feature James T. Kirk and Spock.

Some of the scenarios: Alexander and Hephaistion, Starfleet Regs, Super Vulcan and The King, Kosmic Kommandoes, Leather Kirk and Spock, and Love Slave.

The different designs for Spock's cock in the paper doll set drew on popular fanon and headcanons about Vulcan genitalia; many of them referenced fanfics written between 1972 and 1978 that would have been well-known to fanzine fans.

Many of the cocks for Spock referenced popular Kirk/Spock fics: B'Yadu, Cosmic Fuck, Shelter and Poses, and About the Size of It. See more at Vulcan Genitalia.

Details from one of the two bigger illos:

Comments by Gayle F, the Creator

These comments and instructions are from an undated fanwork, perhaps a prototype of the finished project? 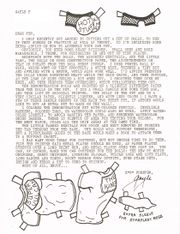 commentary and instructions by Gayle

I only recently got around to cutting out a set of dolls, to see if they worked in prated as well as theory. So I'm including some extra advice on how to assemble your own set.

Obviously, you need some sharp scizzors [sic]. Small ones are more manageable, I think, for squiggling in and out of tiny places.

Reinforce both the dolls, the assorted genitalia, the little tabs, and the dolls on some construction paper, the accouterments on that or scraps from the doll sheet itself. I used Pental Roll N' Glue, which wen ton very smoothly; a white glue, thinned a tiny bit and applied with a brush, would also work well. I'd advise pressing the dolls under something heavy while the glue drives, and then cutting as the legs o mine curled a bit when cut. I smoothed them over my knee, and then pressed them overnight, which straightened them out.

The demonstration dolls are printed on a slightly different paper than the dolls in the set. I did a small sample run some time ago, and then lost my original printer. The dolls in the set are on a very similar paper, slightly lighter, and with less tooth (I have a few of these sample sheets of the main two-sheet set, if anyone would like to buy an extra set to hang on the wall.)

I colored the demonstration set with colored pencils. Indelible markers, colored inks, or watercolor could also be used. Apply watercolor lightly, to avoid warped the paper, and remember watercolor dries darker. There is plenty of area for testing your colors. For the best match, color all the skin at the same time.

The little tabbed genitals for Spock are best removed by pushing the table through from the back. The dolls will support themeless, but a pipe cleaner glued to the back would make a hook to attach them to a support object.

I had many more ideas for costumes, but not enough time to do them. Plus the printer said metal plates should be used, as paper plates stretch over a long print run, and metal plates send the cost up. You can, of course, make your own costumes for the dolls: the new ST movie uniforms, dress uniforms, lounging pajamas, Vulcan lord and love slave, Lone Ranger and Tonto, Rocky Horror Show outfits, even stage sets. Design and xerox a set for friends.

The Dolls in the Wild

Some examples of the dolls out in the bigger world are below.

I think Gayle is the origin of the double ridged dick in K/S, which was very popular. Gayle has these paper dolls of K and S with costumes you can stick on ("love slave outfit," "leather corset with the bum flaps," "bondage cuffs,") and they come with different cocks. She pointed out which ones were due to who. All I remember is the double ridges. [2]

[regarding the authors who wrote the pro book The Price of the Phoenix]: The authors sure spent a lot of time dressing Kirk in those novels. It was like they had Gayle's K/S paper dolls beside the typewriter.[3]