From Fanlore
(Redirected from Tentacle)
Jump to navigation Jump to search

Tentacles are commonly used for kink purposes, both commercially and in fandom. Probably the most infamous use of tentacles is with the tentacle monster from anime, which has inspired much fanart and fanfic across a variety of fandoms as well as influences in other commercial mediums, though various types of tentacles have been used in many fandoms.

The most obvious and famous example is Urotsukidouji aka Legend of the Overfiend, the progenitor of the tentacle hentai genre. Another manga from the same creator, Demon Beast Invasion, is also a famous example. The genre is sufficiently old and diverse in Japan that it has spawned numerous parodies such as La Blue Girl, an anime about a sex ninja who uses her powers to battle tentacle monsters. Commercial examples tend to feature female victims and nominally male monsters, though female monsters are also somewhat common, and male victims are not unheard of. Many other kinks are commonly found along with tentacles, including inflation, pregnancy, guro, and body horror.

The tentacles can belong to creatures, such as the tentacle monster. In these cases the encounter is often combined with non-con or rape kinks, known as tentacle rape, as the penetration is involuntary. Often, the creature is either an amazing lover or produces aphrodisiac fluids.

The tentacles can also belong to machines. This can be non-con, but can also take the form of elaborate sex toys. For example in some Stargate Atlantis fic, Atlantis can provide tentacles as sex toys that react to the thoughts of ATA gene carriers.[1][2] Mechanical tentacle arms are common in superhero canons.

Sometimes the kink can be voyeurism when the other half of the pairing witnesses the tentacle violation and is turned on by it, or the tentacle monster acts as an AMTDI device and makes them have sex too. 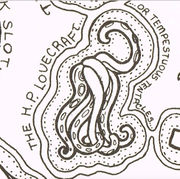 A different kind of tentaclefic is a subgenre of an alien kink in science fiction stories, in which aliens have genitals different from the human norm, that are or come with tentacles. This can be canon, like in Babylon 5 for the Centauri, or fanon as in Star Trek: TOS K/S for Spock, who is frequently described and depicted with genitals that are alien to various degrees, including tentacled versions. For more detail, see Vulcan Genitalia.

Similarly in fantasy, non-alien but sentient creatures can have tentacles, for example in Little Mermaid femslash,[3] or other merpeople AUs.

There is also the option that a normally non-tentacled character (temporarily or permanently) grows tentacles and uses them for sex.[4]

Due to a genetic mutation, some female and male characters in the Sime~Gen fandom have tentacles on their arms. They are used for "feeding" and bonding to other characters, both opposite and same gender.

While the tentacles are technically not used in a sexual way, there is a strong undercurrent of sex, both consensual and non-consensual, in these fanworks.

Fandoms with a lot of tentacles

For example, Devour is a picspam devoted the the female tentacle monsters in the manga Claymore.

Characters with other kinds of tentacles:

Character transforms into something with tentacles:

Fanworks for Homestuck and Welcome to Night Vale both frequently feature tentacles (or "tentabulges" in Homestuck), often presented as a standard part of a character's anatomy.

Tentacles are also common in the videogame fandom Prototype, although the Canon calls them "tendrils".

Other types of tentacle fandom