Unsleeping is a gen Sentinel story by Martha. It's the first part of a series that is continued in the Sentinel/Stargate SG-1 crossover Lovely and the last part, Tatters, which is also a crossover with Angel: The Series and the Cthulhu Mythos.

Unsleeping was first published online and then later republished as 125-page zine. 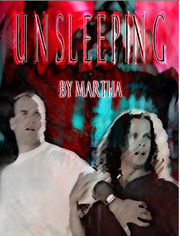 The online version has cover art by Livia Penn and an illustration by Trekker. Both pieces are photo art.

"Blair is betrayed into the hands of necromancers, and Jim discovers that neither his gun nor his senses are any use against the dead. Now that Rainier University's darkest secrets have exploded into the light, will anyone in Cascade ever get a good night's sleep again?"

"Madness. Jim could never have slept through something like that. It just wasn't possible. Nevertheless, he walked slowly around and looked at the floor between the bed and the window. The geometry of the room seemed all wrong. The angles had never been square, but now they tilted and verged on the edge of insanity. Jim had to shut his eyes against a wave of vertigo, and when he could open them again, he saw the line of muddy, bare footprints leading away to the window. There was an indescribably foul smell in the room, and as Jim clapped his hand over his nose and mouth, trying to block it out, he saw that little toe on the left foot was missing." 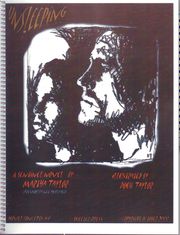 Don't read this if you don't want to be spooked, or if you easily get nightmares. The Sentinel meets Cthulu. As ever, this author is subtle and creepy and picturesque. For example: describing, as only a Sentinel would hear it, the sounds of a corpse decaying (shudder). But even in the non-creepy things, we have well-painted scenes:

Students were pouring into the library in a steady stream, their arms or their backpacks weighted with books. They brought the scent of the night in with them, clinging to their clothes and hair. The evening smelled cold and clean and sharp, and the library was warm, the air a little close from the overwhelming proximity of so much paper and so many books, the heat of all the computers in Reference, and the constantly-running copy machines.

The characterisations of Jim and Blair here were terrific, and the other characters weren't flat either. Professor Nagle was interestingly done, making us more and more wonder how involved he was, and what his motives were. And the students were made even more disturbing by their sheer ordinariness. I also liked how the author used the fanon idea of Blair as a trouble magnet, and twisted it into something disturbing. The light attracts the darkness, but the darkness cannot put it out. (Not if it refuses to be put out, anyway...)

This is another creepy story, and no, I do not have an unhealthy obsession with demonic rituals, really, I don't. I'm just a fan of scary stories. This is a great one, too. Plus, it's not only scary, but it plays with the canon idea of Blair's shamanism in a very, very cool way. This story is gen but it does contain some nice J/B cuddling, and is so fast-paced, there's no room for slash in it anyway. A great, thrilling read.[3]

If you like a good, long, plotty horror story, this is for you. A tale of modern necromancy, a creepy story, which plays very nicely with Blair's shamanism, one that will give you more than one shiver and will keep you awake all night long.

And a good advice: don't begin to read it if you can't obliterate yourself from the world for a quite respectable amount of hours. Because this is long, and compelling, and thrilling, and you wouldn't want to stop once you are reading. And yes, that's why this rec comes on Friday night *g* For those of you who don't know Martha's writing, ( have a taste here )

Oh, yes, I know! amazing... so go and have a good scare :D Unsleeping. And don't forget to let's Martha know how much you enjoyed this.[4]

Oh, do I *ever* love a good horror tale. Screw romance, screw *screwing*. If a writer can give me a shiver or two, I'm theirs. And Martha delivers the goods with this long and satisfying tale of modern necromancy the old-fashioned way....*bahahahahahahahaha*

Okay, so maybe I'm having one of those inappropriate emotional reactions the shrinks are always nattering on about, but you know what? I don't *care*.

This story was *marvelous*, I adored it, and if you like a good scare?