Prototype, officially styled as [PROTOTYPE] is a video game fandom. There are also a couple short comic series tie-ins.

The first game in the series was released in June 2009, an sci-fi action-adventure game featuring the shapeshifting antihero Dr. Alex Mercer. He begins the game with amnesia and seeks to find out the truth about the Blacklight virus that is ravaging the city. Through the course of the story, Alex finds out he is not actually the doctor who created the virus: he is actually the virus itself which has taken humanoid form after killing and consuming the doctor.

In 2012, Prototype 2 had players take the role of Marine Sergeant James Heller, with similar powers. James is on a quest to destroy Alex, who has, in the intervening years, discarded his humanity and become a villain.

Prototype 2 received decent critical reviews, but "failed to move even a million copies across all platforms", and subsequently Radical Entertainment was shut down.[1] The sequel's characters and storyline appear much less often in fanworks. Many fans viewed the sequel as a disappointment and were saddened, or even offended, to see their original protagonist made into an enemy they have to kill.[2]

Far and away the two characters Alex is shipped with most often are Desmond Miles and Robert Cross. Het shipping, which is relatively rare, is most often Alex/Elizabeth Greene (Elizalex),[3] or Alex/Karen Parker.

In a June 2009 video review, Ben "Yahtzee" Croshaw of Escapist Magazine couldn't decide whether or not Prototype was a better game than inFAMOUS, a game released by Sucker Punch Productions around the same time.[4]

So at the end of that video I suggested an unbiased tie-breaker that could be kept unaffected by actual game quality. Namely, which of the two studios could produce the best image of the rival game's main character wearing women's lingerie. Well, imagine my surprise when representatives from both Sucker Punch and Radical announced their intention to take this final showdown seriously.[5] 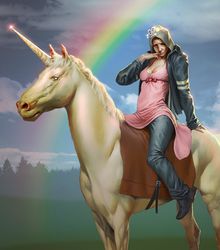 The resulting image produced by Sucker Punch showed Alex Mercer in his standard jeans and hoodie but also a pink dress and sparkly tiara, as well as having "shapeshifted himself some very lovely titties and a pair of child-bearing hips", in the words of Croshaw, who adjudicated the contest.[5] This rendition of Alex is also riding a unicorn, and there is a rainbow in the background. The image reached moderate meme status within Prototype fandom, with many artists reproducing the outfit in their own fanart for years to come.[6][7][8]

Croshaw's final verdict: "It's a close call, but I'm going to declare Sucker Punch the winner by one lovingly-rendered pair of breasts. Also their unicorn is a much prouder, mightier steed, and Alex's expression is delightfully coquettish. Therefore InFamous must be the better game. Buy InFamous. Prototype's still good, though. Buy it as well."

A slang word in the Japanese Prototype fandom is "hijiki" (ひじき). In standard Japanese, this means a type of edible seaweed (Sargassum fusiforme a.k.a. Hizikia fusiformis). In the fandom slang sense, "hijiki" refers to the Tendril Barrage Devastator attack[9], or more broadly, as a slang for Alex himself.[10]

I know this is a little late and spoiler alert to those who yet to play or beat it. Prototype 2 had an ending that basically told you that there is more to come when Dana said "what now?" or something like that. Prototype 2 was also a disappointment for me when James killed Alex because i see him as the original prototype and the series would be not as good without him if it continues. Hopefully though he didnt die because he can regenerate and Heller didnt consume the arms or the blood that was left over from the fight. If Mercer can survive a nuke turning him to nothing, then im pretty sure he is somehow still alive or i hope so. So do you know or think there will be a prototype 3? Thanks P.S. If you think there will be another what are your ideas on how the series will continue? I think Heller might have split personalities with Mercer still alive inside him or he will regenerate, cant really tell for sure.

P.P.S. Who is your favorite prototype? Mine is Mercer just because he is the original prototype.[11]

Its rather sad. In first prototype you played a morally gray character, a bold move by the gamestudio, then for the second game they wimp out and bring out the oh-so-boring hero with cliches up the arse, while keeping a gameplay that advocates eating innocent bystanders for health and general wholesale slaughter.[12]

I think my biggest problem with Prototype 2 is that they turned Mercer into the the goddamned villain! Yes, I know he wasn't the most... trustworthy character, but I wanted to think he learned what a conscience was... but instead, they made him a villain for no good reason! Well, actually, there was a follow-up comic between the first and second game in which Mercer tried to be good... but apparently, when faced with the nature of humanity, he turned evil. Wow, just... wow. Thank goodness I don't have superpowers, or I would have turned evil years ago![13]

[In Prototype 2] Mercer was some Saturday morning cartoon villain all of a sudden and we were just supposed to forget about game one. [14]

[...] What’s truly unfortunate is you have many fans, myself included, whose brain stems are fully formed and don’t appreciate coming back to beloved characters to find them written by ten monkeys with five typewriters. Did any of your writing team play the first game or did they just know of its general existence? I assume they went into writing knowing that the name of the character was Alex Mercer and he had magical emo powers and ???? ???? ???? then they just got blind drunk and made things up as they went.

Literally nothing else could explain the train wreck of character de-evolution that I witnessed in Prototype 2. [...]

Don’t try to talk to me about your comic either, the one you claim explains what happens between Prototype 1 and 2. It’s a pity you pulled one of your monkeys away from the typewriters and forced it to write a comic script with it’s own feces before you would feed it, you should have expected that that script wouldn’t be very good. Yet you published it anyway.[15]

Mercer from the original prototype was better. Heller was just a stereotypical angry black man, and never deviated from that character archetype. Mercer, in my opinion, is a great example of character progression. He goes from being out for answers, with little regard for who's in his way, to lamenting what he has to do in order to stop redlight from spreading and save Manhattan as a whole. When comparing the two, I was quite disappointed with Heller.[16]

I like one character over another character. I have my own opinion, nobody is right or wrong when it comes to opinions. Sure Heller may technically be weaker then Mercer, but I personally enjoyed Heller's story and personality more. Heller had a loving wife, and a daughter that he loved more then anything. He had all of that taken away, he didn't even get t say goodbye. Yes, his daughter wasn't really dead, but he didn't know that at the time. He actually reminds me of Kratos from the God of War series in that regard. I think at this point we should just agree to disagree, we don't need to argue over a video game character. And besides, I think it's safe to say that Prototype/Prototype 2 isn't the best game series ever, so why argue over it like it is?[17]

You're OP as fuck both as far as story and gameplay go, however you still need to know when to retreat and which powers to utilize so it's not press X to win.

You've got all kinds of fun powers.... The amount of mayhem you can cause is probably among the highest in video games ever. The story is actually quite interesting, then Prototype 2 came and fucked everything up.

Go get it, it's an amazing "fuck shit up" game and it's an amazing super"hero" game. Prototype 2 has better gameplay but story is so retarded it may severely hinder your enjoyment. 1 is a must play, though.[18]