Alex Mercer/Desmond Miles is a crossover pairing combining the Assassin's Creed and Prototype fandoms. Sometimes the ship is simply referred to as ProtoCreed, though this can also mean any sort of crossover between those two fandoms. 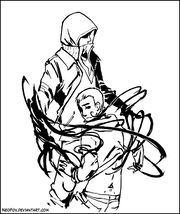 Alex and Desmond by neofox (2010). Desmond being ravished by Alex's tendrils is a common theme in the more smutty works of this pairing. 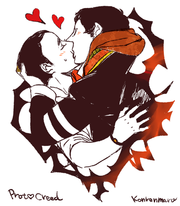 I'm lost without you by Konrenmaru


can someone explain to me the ship that is Protocreed?
As in: why is Desmond Miles and Alex Mercer a … thing? Is it literally just “hood bros”? No mocking just legit curiosity. People should know crossovers fascinate me. (also no spoilers, I started this game recently never played before thanks)

[chamiryokuroi]
There is literally no one to ship Desmon with on all the asscreed games unless you invent time travel so people just took the first male from a recent game who also didnt have any potential ship partern and behold protocreed was born, at least that’s my theory[1]

If you were wondering why Protocreed is a thing, there is many reasons. One is the memory things. They both share memories that aren't their own and experience said memories. Another one is the whole 'against the government thing' and another is 'we can stealth into places and kill lots of people'. One of the big ones is that they were technically in the same city at one point so que the 'meeting by chance' cliche that works well.[2]

In my opinion, there needs to be someone interesting for Desmond and since Alex does not really have this much potential pairing partners in his game, he’s paired with Desmond. Originally, I think, he was rather paired with Altair (because of the hoods I guess), but since Altair has a lot of pairings for himself and another timeline Desmond became the perfect crossover victim.[3]

Alex, as a character is paranoid, but focused. He pursues what he likes because he enjoys working. He is methodically minded. Post infection, Blacklight is focused on trying to figure out what the living fuck it is, and to some extent, “who” it is. It is torn between self preservation and what is left of Alex’s mentality and personality. Ultimately, Blacklight preserved itself in Heller, (thinking about it that way, there really was no win against Blacklight, since Alex was the one who infected Heller).

Desmond, as a character, is also paranoid, but his focus is kind of all over the place. He’s intuitive, but also very sporadic. He wants to avoid responsibility, and is inevitably torn between this thing that “only he” can do to “save the world” and saving himself. He ends up “saving the world” (like Blacklight did in the first game) though through some weird writing shenanigans he does the one thing he literally said wasn’t a good idea at the beginning of AC3)

Neither of them really have a counterpart for slash in their games. Alex sort of has been shipped with Robert Cross, and Desmond’s been shipped with Shaun Hastings (in the current day ships, not counting the time travel/apple shenanigan slash), but in general there’s little to go on as far as character relations or undertones in those relationships. So you’ve basically got these two honestly kinda loner characters, and if you’re a slash shipper, you clearly don’t want to have Desmond with Lucy and ONLY LUCY, so why the fuck not line up these two loner weirdos.

sometimes ppl ask me why does this pair exist, i dunno how to ans, but, u know, it somehow 'cures' the 'pain' from both original games. Two tragic roles.(?)[5]

A common theme criticized in Alex/Desmond fanworks is the portrayal of Alex as very sexually aggressive and Desmond as meek/submissive.[6][7]