If you are looking for the zine, see Interphase.

The Interphase calendar is a Star Trek: TOS 1976 calendar by Gayle F with two issues. The illustrations were republished in the Interphase Calendar Illo Book by boojums Press in 1977. 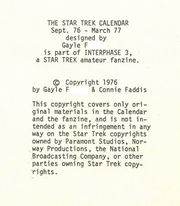 The extra chunk of paper that fell out of the envelope... is the Special Calendar Supplement ... Let me mention right here that the calendar is only available as part of the zine; it is not available separately. [Gayle F], the artist whose illustrations make the calendar so special, has been on the periphery of fandom for a while, but this is, I believe, her debut in a fanzine. Gayle is a multi-talented and remarkably imaginative person (you will probably be seeing her excellent fiction in zines soon, as well as her dynamic artwork), and it is with wide-eyed, 'goshwow' gratitude that I'd like to publicly her welcome to fanzine fandom.

Gayle had sent me some samples of her art—and you know how extraordinary her art [is]. It is original beyond belief. Yeah, you can see some .... influences from ... art nouveau art and things like that, but there was such a freshness. And competence and power in her work. It was ... beautiful, and I was trying to think, do I want to jam this into a bound zine where it can’t really be admired outside of the zine? Because to me, if I looked at her artwork, it wanted to be in a frame. It wanted to be on a wall. It wanted to be somewhere where it could be appreciated solely for itself.

And I remember thinking and thinking and thinking what can I do? What can I do? Well, I looked around at what some other not-zines were doing, but professional publications, and there was a—about that time, there was a rise of the beautiful, printed art calendar, and you couldn’t go to a bookstore without finding these beautiful prints, full color of course, art calendars. And they started out with, oh, you know, reprints from some of the great illustrators and artists, and you can still find those, but this was when they started becoming A Thing, and it occurred to me that that would be a way for me to present, as part of Interphase, Gayle’s exquisite and truly extraordinary art in a way that it could be appreciated for the art that it was, because it was beyond illustration. It was art. IS art. To me, she is probably the most innovative artist in fandom, at least that I’ve ever met, and that isn’t saying that there aren’t many, many wonderful, talented artists in fandom, but she was her own artist. She was unique. Really different. And just breathtaking. So, I can’t say enough about her—how beautiful her art is. Even the most erotic of her erotic art. It’s never smarmy because it’s elevated. It celebrates the life force in its physical manifestation, I would say. So I was honored to do that, and I asked her to put together a calendar, and she was delighted. At least as far as I could tell, she was delighted to do it because she sure sent some beautiful pieces.

The calendar cost more because I had to take it to a good printer to do offset which was kind of the cutting edge of reproduction at that time, of mass reproduction of any quality, but no, because we did it in a standard size of paper and you know, a lot of, and, and, stapling in the center was not a big deal to the high-end printer I took it to. It costs, you know, but I passed that cost along to the purchasers of the zine. None of us made any money off of it, but, you know, I thought that if people love this, they’ll be willing to pay for it, and if they don’t, they just won’t buy a zine the next time. [1]

The first Interphase Calendar is 14 pages long and covers September 1976 through March 1977. It was designed by Gayle F and published in 1976 as a supplement to Interphase 3. The copyright notice on the back of the calendar names both Gayle F and Connie Faddis. On the cover: "Interphase Presents Adventures on the Fictional Plane in Which the Enterprise Visits the World of Liteature," and "To be Continued in Interphase IV".

The cover image shows Spock as Sherlock Holmes and later appears in a slightly different form as the cover of The Holmesian Federation #1 in 1978.

The second Interphase Calendar covers May to November 1977. On the cover, "Interphase Presents Star Trek Goes to the Movies." It was published as a supplement to Interphase 4. Star Trek fanart fusions in the second calendar include Road To Morocco, Frankenstein, Shane, Children Of Paradise, The Beauty and The Beast, The African Queen.