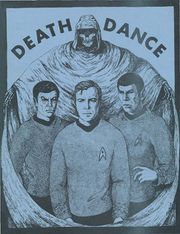 Deathdance is a gen novel written by Diana King. It was published in 1979 and contains 119 pages. Merle Decker illustrated the story.

From a Publisher's Ad

"A new ST novel... Mainstream drama with an emphasis on Kirk/Spock/McCoy characterizations and relationships... Some adult language is included but an age statement is not required." [1]

In 1984, the author explained the birth of this zine:

What really galvanized me was New Voyages. When I read these stories by other fans, I decided to try writing some of my own. I spent a large part of '77 working on one (still unfinished). As I worked I became worried that some other fan had already dealt with my theme in a fanzine (I'd never seen a zine, of course), so I sent an out line and sample scenes to Marshak and Culbreath just to ask if I was duplicating some one else's idea. Months later I got them back with a note from Carol Frisbie saying that the story sounded interesting and that I should go ahead with it. I had no idea who Carol was or why she was answering Marshak and Culbreath's mail. Also, it was intriguing that she lived nearby. So I wrote back, rather baldly demanding to know who she was, etc. She hasn't recovered yet, but her answer was cordial, and she was willing to take a look at Deathdance, which I had been working on furiously for several months. [2]

Generally rated G with the possible exception of the spectres that might upset the sensitive. SASE for price information.

After landing on an unknown planet, Jim Kirk begins to see death's heads when he looks at people — and then those people die! An interesting exploration of the Kirk-Spock-McCoy interdependence and devotion, with some good adventure scenes. Recommended. [3]

This is an excellent novel by an author whose work I hope we'll see more of in the future. The story begins with a planetary landing on Sey 4903 to investigate some technologically advanced artifacts not supposed to exist on that uninhabited planet. The trip proves to be of scientific import, but more astounding and perplexing is its effect on Kirk, for on his return to the ship, the captain finds himself with an excruciating headache and the terrible ability to predict death. One by one, the deaths he foresees happen, and he is powerless to prevent them. And then he envisions Spock's death... The plot is absorbing, the writing skilled, and the characterizations very good indeed. Diana has an understanding of Kirk, and we know the captain better for her sensitive portrayal. She also has a 'feel' for K/S; as her Spock explains: 'The basic fact about Jim and myself is simple: Neither of us worries much about his own death, but neither wants to be the one left behind.' Exceptionally well done. [4]

This was an excellent novel. After returning from a planet, Kirk foresees the deaths of several people...Later, he foresees Spock's death as well. Deathdance was well-received by many readers. [5]

Captain Kirk, Spock and a research team discover the remains of a 25,000 year old civilization that once had a high level of technology. Kirk bumbles into a thorn bush after an artifact that he should have left alone, then soon starts having visions of his crew and others as skeletons moving around in their uniforms and clothes. In short order, these people start dying. Then he looks at his best friend, and Spock is the next skeleton... [6]