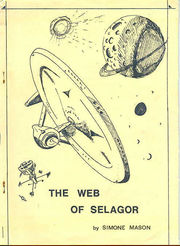 The Web of Selagor is a 39-page gen novel by Simone Mason, with illustrations by Alan Mason and a cover by Michael Cleaver.

It has a sequel called McCoy's Nightmare.

From a publisher's ad: "'The Web of Selagor' is a story about the beginning of the Kirk/Spock friendship, how it becomes established on a personal level during a nightmare test by never-before-seen aliens who are intent on killing Kirk." [1]

This is a novelette which is set very early in Star Trek's time-frame, not too long after Kirk has taken over as Captain of the Enterprise. Kirk wants to get closer to his first officer, wants to know him as a man -- not just as an officer -- and Spock will have none of it. He is just not ready to let his barriers down to a man he hardly knows. They get along together pretty well, but there is definitely a wall between them, and it is of Spock's making. Then, they run into, and are trapped by, a force field in the shape of a web. While they are trying to figure out what's going on, one of the originators of the web makes contact. The being, with glowing eyes, a huge head, no nose, a large red slit for a mouth, and hair standing on end, is reminiscent of the typical BEM, and it tells them to either leave or take a survival test. If they choose the test, the two officers will be taken to a hostile world, there to attempt survival. If they both survive, they pass the test, and perhaps friendly relations can be established. If only one survives, the test may be a success. If they both die, they fail the test, and the people of Selagor boot the Enterprise out. It's Kirk's choice. Kirk chooses the survival test. He decides that Spock will accompany him, hoping not only that his trust of an alien will gain him brownie-points with the Selagorians, but hoping that through this test he can learn about Spock, and that perhaps sharing the peril will bring them closer on a person basis. Unknown to Kirk, Spock agrees to accompany the captain with the same thing in mind. They are not only testing the test, but each other as well. Their time on this world is one of struggle, hardship, danger, and self-sacrifice as the two men pull each other through one hazard after another. They also come to find out how much each has come to mean to the other. There's more to the story, of course -- the inner plot of Kirk and Spock is pivotal to the outer plot of the Selgorians and why they are so hostile, and it's all tied together quite nicely. There are illustrations -- more than I've seen in any other STAG publication, with a really nice front cover illo. The zine is mimeoed and is quite legible, with the overall quality being very, very good, as is normal for STAG. If you like action-adventure, as well as the basic relationship between Kirk and Spock as presented in 'Star Trek' (not the gay experiment), then you will certainly enjoy this zine. Highly recommended. [2]