The Star Trek Action Group, commonly called "STAG," was a fan club founded by Jenny Elson & Terry Elson in 1973 with the aim of raising enough money to run a Star Trek Convention in Britain. 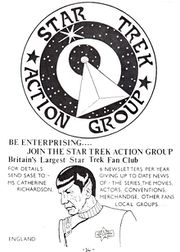 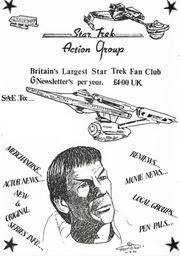 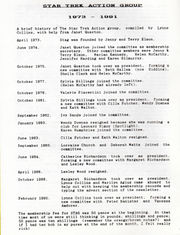 Noticing the ever growing interest in Star Trek, two of its fans, namely Jenny and Terry Elson, set up the Star Trek Action Group in 1973. The club was used as a springboard for the dream that the two had, which was to hold what would become the first British convention... Prior to the Con, an interview appeared in the Elson's local newspaper, an article that sparked off a reaction that neither of them had ever expected. Not only did it appear in their newspaper, but was also syndicated in the national press, and as far as Australia! They were deluged with mail and STAG had begun. In 1975, a familiar name to Trek fandom took over the role of club president. Janet Quarton (of IDIC fame) took over the running of the club. Previously in 1974, Janet joined as Membership Secretary. She would remain as President untill 1981. Janet formed a new committee, including fellow IDIC committee member Sheila Clark. Sylvia Billings... joined the committee in 1977 and then took over the running of the club in 1981. Again a new committee was formed and this included Cilla Futcher, Wendy Downes and Kath Walton. In 1978 another familiar name to fanzine readers joined as a committee member, Valerie Piacentini. During 1981 and 1983 a staggering amount of fiction was released, mainly I would imagine due to Sylvia's passion for Trek fiction. During this period of Sylvia's reign was the time that I was a member of STAG, and I can attest to this fact as I would endeavour to buy most of the fanzines that they released. During January 1983, Wendy Downes resigned because of her involvement in running the Leonard Nimoy club, Spotlight. Soon after, Cilla and the remaining committee member brought in by Sylvia, Kath, also left. To replace the gap on the committee, Lorraine Church and Deborah Watts joined. In 1984 a new president took over in the form of Catherine Richardson, and once more a committee was elected. Margaret Richardson and Lesley Wood took over the running of STAG with Catherine. 1988 saw Margaret taking over as president and Lynne Collins (now Banister) joining the. In 1990 Lynne took over the Presidency and remained the President until the club's demise. She brought in new committee Peter Banister and Vanessa Amdurer, all of whom also remained on the committee.... In its twenty year history the club has done a lot for fandom and Trek. The fact that it's lasted this long shows that they must be doing it right and it's evident that they have Trek and its fans firmly in their hearts. [1]

Note: Art from these zines has been included on Fanlore with the publisher's permission.