You may be looking for the TOS zine Star Voyages.

Star Voyage is a gen Star Trek: TOS anthology published in the UK. Each issue was dedicated to their mimeograph machine: ".... BONES - Grumpy, grouchy, coughs stutters and throws paper around the room but gets the job done in the end. House trained by CATHERINE RICHARDSON and LESLEY A. WOOD."

There are some very nice stories in this series. In #1, my favourites were After the Night by Kelly Mitchell, which takes place after the refusion at Mount Seleya. Kirk stays on Vulcan to come to terms with his personal losses; also The Return by Janis Bowers, also set after TSFS. In #2, In Whatever Fleet deals with the eight ex-crewmembers re-affirming their friendship after the refusion at Mount Seleya. [1] 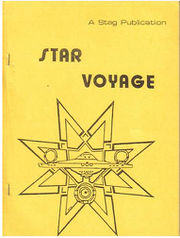 Star Voyage 1 was published around 1986 and contains 68 pages. 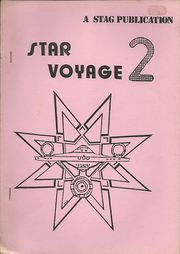 Star Voyage 4 was published in 1989 and is a 43-page single novel by Pony Godic called "The Horla's Lair." It was later printed in Orion.

From a publisher's ad: "Uhura is trapped in the Horla's lair and it is only a matter of time before she is lost forever. Kirk has to solve the puzzle or face the consequences."