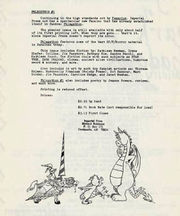 flyer printed in The World of Dark Shadows #27 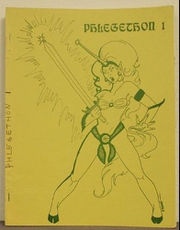 This is a really varied zine. To start off, there's an ST story called 'Silent Sound' by Kathleen Newman about an alien force that leaves the Enterprise deaf and blind, how they relate to each other and the alien makes for some interesting reading. 'Three to Throtaket' is a sword and sorcery story about three unlikely, but delightful, rescuers. I also liked [Kathy Resch's] 'Blue Eyes' - a Dark Shadows story but good for anybody who likes vampires, and part 1 of 'The Indictment' by Bethany Hew -- a modern day horror story set on a college campus -- which is probably why I like it; I want to read it to my roommate, a nervous soul, to watch her sit up all night. Also included in this issue are a Star Wars vignette and sf stories, one by Sandra Necchi and one by Jim Passmore -- like I said, something for everybody. Some nice artwork, too, including work by Marshmelly, Framizam, and Theresa Holmes, not to mention a good 'Quentin' and 'Princess Leia.' All in all, a fun zine.[1]