From Fanlore
(Redirected from Zap)
Jump to: navigation, search

You may be looking for the proposed zine Z.A.P.

Zap! is a gen Star Trek: TOS get Kirk anthology fanzine by Beth Hallam and Margaret Draper. The last issue was called The Seacon Edition.

It was in those days that we learned the ingredients Janet considered essential for a good Star Trek story - Kirk had to be hurt, and hurt bad! And there just weren't enough of her type of story around. That was how Margaret Draper, Ann and I got bullied, flattered, cajoled and bribed into writing them for her. And write them we did, along with a few other people Janet got at, like Sheila. Just a few weeks ago, Margaret Draper and I went through "those Janet stories" and re-read them. Some of them were quite good, we decided. Why hasn't someone published a 'zine of them? So we decided to do just that, the result is 'Zap!' a Quartonly magazine. The first edition of 'Zap!' will be available at the con. Anybody interested in 'Zap!' should write to for information, enclosing a stamped addressed envelope... [1]

... zines devoted to bonking stories. Agonise along with our heroes as you read some of the most applalling prose ever penned by Margaret Draper, Beth Hallam, Sheila Clarke, Marion Dougall, Ann Looker, etc. Guaranteed to bring a tear to the most hardened eye. [2]

Margaret Draper and Beth Hallam are sorry to announce the death, by natural causes, of their zine 'Zap'. No flowers by request, donations to charity preferred. [3] 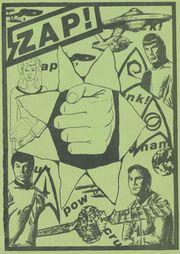 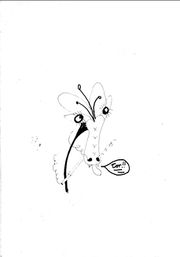 back cover of issue #1, Ann Looker and Jackie Wright 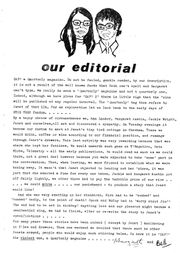 Zap! 1 is 44 pages long and was published in 1977. Interior illustrations mostly by Beth Hallam.

ZAP! a Quartonly magazine, Do not be fooled, gentle reader, by our description. It is not a result of the well known facts that Beth can't spell and Margaret can't type. We really do mean it 'Quartonly' magazine and not a quarterly one. Indeed, although we have plans for 'ZAP! 2' there is little sign that the 'zine will be published at any regular interval. The 'Quartonly' tag then refers to Janet of that ilk. For an explanation let us look back to the early days of STAR TREK fandom...

By a happy chance of circumstances we, Ann Looker, Margaret Austin, Jackie Wright, Janet and ourselves, all met and discovered a sympathy. On Tuesday evenings it became our custom to meet at Janet's tiny tied cottage in Chesham. There we would drink, coffee or wine according to our financial position, and rummage through Janet's drawers. This last activity was very rewarding because that was where she kept her fanzines. We would unearth such gems as T'Negative, Beta Niobe, Telemetry - all the early publications. We would read as much as we could there, not a great deal however because you were expected to take 'some' part in the conversation. Then, when leaving, we were frisked to establish what we were taking away. It wasn't that Janet objected to lending out her 'zines, it was just that she exacted a fine for every one taken. Jackie and Margaret Austin got off fairly lightly, we other three had to pay the terrible price of our vice...we could write ..... our punishment - to produce a story that Janet would like! And she was very exacting in her standards. Kirk had to be 'bonked' and 'bonked' badly, to the point of death! Spock and McCoy had to 'worry about Jim! The end had to be set in sickbay! Anything less and our pleasant night became a penitential slog, we had to finish, alter or re-write the story to Janet's specifications . . . , . ,

For many years these stories have been unread (except by Janet ) mouldering in files and drawers. Then one weekend we decided that there must be other Janets around, people who would enjoy such stirring tales. So here it is 'ZAP!' the violent one, a Quartonly magazine.

The editors say that if they don't get some contributions for the next issue, there won't be an issue #3. 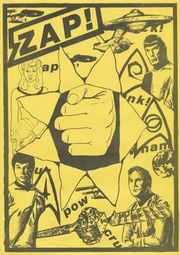 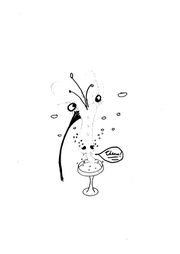 back cover of issue #2, Ann Looker and Jackie Wright 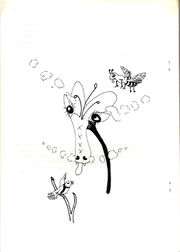 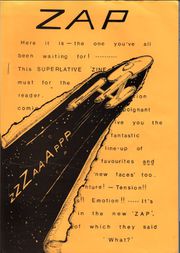 front cover of issue #3, Maggi
From the editorial:

Zap 3' is the same formula as usual, 'Kirk-bonking Janet-Quarton-style,' with only one exception. The exception? It is a called 'Close Call, Mr. Spock,' and Chris Hall sent it to us. She started off to write a 'Kirk get'em', and ended up with a 'lie down and be quiet, Spock' tale. When typing up this stirring yarn, I came unexpectedly upon the line, 'She had hours to spend undisturbed in bending Mr. Spock to her will.' I looked twice, and my typewriter began to steam gently, causing my glasses to mist over. Surely not, not 'Zap', not printing that kind of story!!!??? Imagine my disappointment on discovering nothing more traumatic occurred to Spock than... no, you read the 'zine for yourself. But no one appears to have told our botanical friend on the back cover that it isn't that kind of 'zine.... pity.

Traditionally, 'Zap' has been dedicated to Kirk-bonking. But, ever alert to the subtle things of change, I suspected from S. Meek's hilarious prelude to issue #3, wherein our heroes ponder the probable perils of that issue, that tradition might be broken this time around. And I was right. Oh, Kirk gets it again, amusingly in 'MrCoy's Triumph,' and more seriously in stories by Syrjala and Van der Voort. But for all you Spock fans out there, smugly chuckling at our good captain's fate, 'Zap 3' brings Spock into the choice ranks of the 'bonked' in the dandy tale by C.E. Hall. You see, there's this woman who's obsessed with Spock, and who's never been able to control her desires. She's determined to get him by fair means or foul. Of course, our noble Vulcan is completely oblivious to her existence and thereby seals his fate. After careful investigation, she finds a secluded storage room and lures Spock into it... No, I won't tell. You'll have to read it yourself. 'Zap's' editors have obviously had fun putting this issue together, and you're certain to have fun reading it. [4] 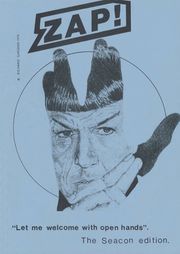 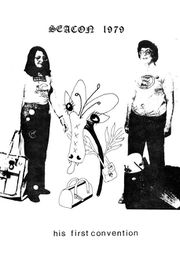 back cover of issue #4
The editorial:

Welcome to the Seacon edition of ZAP!. And welcome to all our guests from overseas, it's nice to see you here in the U.K. for what is going to be a great 'Con.

For those of you who complained that Kirk didn't suffer enough in ZAP! 3, we present ZAP! 4, subtitled 'Super-flog'!' Three-quarters of the way through 'The End of the Affair', just as the gallant Captain was going down for the fourth time, Spock declared that he was sickened - it was with difficulty that I restrained myself from adding 'me too'! By the way, if you like your sadism 'straight' then finish Cilla's story on page twenty-five and skip the next two pages. In line with the policy started in ZAP! 3 another member of the crew gets 'his' in one of the stories, this time it's the 'good, ole, country doctor' that Margaret delights in ill-treating.

Those of you who have searched in vain for the obligatory pictures of the editorial staff, are advised to consult the back cover.