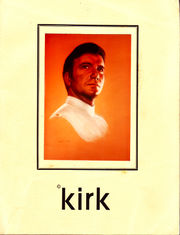 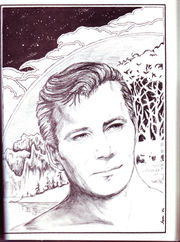 inside art by Suzan Lovett

a 1982 ad, printed in the last issue of The Center Seat

Long-time readers of fan fiction are used to interminable delays, so they won't be surprised to hear that we've hit a few snags on KIRK. We're waiting for one last rewrite on a long story, plus trying to reel in, er, find an artist who likes to illustrate 200 page manuscripts. But everything else is in, typed, and pasted up and waiting, and I'm fair bursting at the seams with pride at the final result. I'm particularly elated at the high quality of artwork, and I'm not just saying that because LaVena and I contributed drawings! Several other Trek-M's have gotten in on the act, such as Rose Eierman, Karen Hunter, Ginny Thorn, & Patt Demetri. [1]

Complications -- A Letter in Interstat

An excerpt from a personal statement in Datazine #24 from one of the editors: "Anyone who wants to plow through the sordid history of 'The Making of KIRK' may have a copy of the statement I wrote for Interstat. It's two pages long, and I wouldn't dream of inflicting it on anything but a letterzine."

Caught in a Publication Snarl

This zine was originally to have been published by WISH, but the fan club folded before the zine was released.

To everyone who's asked "What's happening with the zine, KIRK, now that the William Shatner Fan Fellowship is no longer in existence?": KIRK will be published! I have been working on the copy editing - including numerous rewrites - since last summer. This is not intended as a plug for sales, but rather as a means of informing concerned fans, now that there is no longer an official WISH publication. Sonni Cooper will be the actual publisher (tentatively under the name of WISH Press), and will be taking the advance orders at the old WISH P.O. box address; please direct any questions to me. To allay some fears that have been voiced, I would like to make it clear that this is a fan publication, and all copyrights will remain with the original artists and authors. Neither Sonni nor I have the slightest interest in any negotiation with any professional publishers of Trek fiction. We're aiming for a spring release date but, as always, that's not an ironclad prediction.- KIRK was conceived with Mr. Shatner's sanction, and we intend to take all the time necessary to make this a publication he will be proud to read. [2]

Though the William Shatner Fan Fellowship is no longer in existence, Sonni Cooper and Vel are going ahead with the publication of this action/adventure zine, still aiming it for a Spring publication date. Confirmed contributors include: Mary Lou Dodge, Kathleen Sky, Ginna LaCroix, Karen Hunter and J.M. Dematteis. This is a fan publication and all copywrites will remain with the authors. To place an advance order: $7.00 + SASE to Sonni Cooper [address redacted] (write KIRK somewhere on the outside of the envelope). All questions should be directed to Vel, as she is handling the editing and other arrangements. [3]

Section One - Wish Upon a Star:

Some time ago, when WISH was soliciting contributions for 'Kirk', the editors expressed the intention that this was to be a quality effort in all respects. As far as presentation is concerned, they have certainly succeeded in their aim. Great care has been taken in graphics, layout and overall design and as a result, the zine looks very good indeed.

The standard of artwork varies. The cover by Doug Little is a very attractive full colour portrait of the ST TMP Admiral Kirk and it makes a lovely start to the zine. As might be expected, there are a large number of other Kirk portraits, mostly concentrated in the art/poetry portfolio. Best were Trish's WoK Kirk peering uncertainly over his spectacles and Christine Meyers' series &irk with a beautifully smug expression on his face. My only criticism of this section is that the illos often do not match the poems. When a cheerful poem like "The End of his Watch" by Lois Kiper is placed opposite a thoroughly depressed Kirk by Meyers, they tend to cancel each other out. It is a pity more of the artists were not given the poems and asked to work from them. It might have given a beautifully presented section a greater unity.

Many of the stories are very well illustrated, although one story that cried out for artwork was rather neglected. Gail Bennet is well represented. She is one of the few Trek artists who seem quite happy with action sequences and her confident, accurate drawings are the perfect compliment to Bonnie Hoffman's "The Gift Horse" which is essentially action/adventure. Toni Hardeman and Virginia Lee Smith also employ their skills to good effect, "We Were All The Same Age Once", "Aftermath" and "Reality" are all carefully and sympathetically illo'ed.

By far the longest contribution to 'Kirk' is "The Infinity Factor" by Nadya Emanuel. At almost 70 pages, unillustrated apart from a couple of drawings that do not particularly relate to the text, it is too long. Ms, Emanuel has taken an ingenious plot and almost explained it to death. She has become so fascinated by the background to her story that she frequently loses sight of all else in her desire to describe it. Many of her ideas are interesting and her explanation for the rather odd moral climate of the 'Mirror, Mirror' universe includes reference to the Moslem conquest of Earth in the late twentieth century, family life abandoned in favour of embryo chambers and priming communes, alliance with the Vulcan Empire after devastating war... but embedded as they are in such a complicated plot and written in a style that makes few concessions to the reader, they prove to be too much of a distraction. It is a pity, for a great deal of work and original thinking have clearly gone into this story.

At the other end of the scale are two short stories that are simple, clear and very enjoyable. "Would You Believe?" by Rebecca Reeves is a harrowing tale of extreme boredom and a dragon named Fred/Ashton/Puff (precisely drawn by Lavena Vay Kidd). A dragon of wit and character. "Queen's Gambit" written and elegantly illustrated by Mel White is a confrontation between Enterprise and Romulans woven very effectively into a chess game. The viewpoint is switched rapidly between the players without .losing any of the suspense.

There are a few stories that follow traditional lines. Ginna La Croix's  "Reality" reduces Kirk to a wonderfully squelchy physical and emotional state via  Edith Keeler, Deneva and a human grill (!). "Aftermath" by Armanda Lazar is an Edith  Keeler aftermath story that succeeds because of its restraint aid gives a fresh angle on the characters involved.

Earlier in the zine, there are several stories that focus on the very young Kirk. "Academy Cadets" by Karen C. Hunter is an exciting story of an orienteering exercise that turns into a survival test. "Family Secrets" by Mary Louise Dodge is an interesting explanation of the events surrounding Kodos and the crop failure on Tarsus, Again, it is an exciting story but while characters such as Kodos and Kirk's half-mad cousin Kerry are brought to life quite vividly, very little light is shed on the character of the adolescent Kirk. He is witness to the disaster but seems hardly touched by it. At one point Ms. Dodge describes him as "isolated from everything that was taking place...". It is a description that could perhaps be applied to the Kirks in many of the other contributions to this zine.

But if I don't feel that I learned anything very new about Kirk's character, I was still greatly entertained by 'Kirk'. If you enjoy well written adventure stories with a little humour thrown in, you will like this zine very much indeed. It is a pleasure to look at and very good to read. [4]