From Fanlore
(Redirected from WISH)
Jump to: navigation, search

You may be looking for a similar fan club called William Shatner Fellowship.

WISH published The Wishbook and The Center Seat. The zine, Kirk, was caught in the middle of publication conflict when the club folded.

This club ceased in spring 1981 under controversy regarding tone and alliances, and a new club, the William Shatner Fellowship, sprung up in its wake.

There was much fannish reaction to this club in a number of issues of Interstat, with many fans writing that they disliked the tone and attitude of the club's organizers (mainly Sonni Cooper) and of the newsletter, The Center Seat. 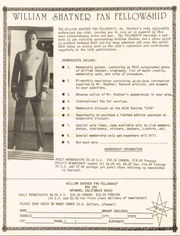 In February 1982, a fan writes that the club had disbanded:

By the time you read this, it will be no news to you that Bill Shatner's fan club, WISH, has terminated. I, personally, was not happy with the general tenor of the letter-insert in the last Center Seat that made the announcement. The newsletter was the usual 'all is right with the world' message with the exception of a very small message of no new memberships being taken. The insert implied that the 'admiral's staff were just too busy and that there was a lack of interest in Bill and his career by his fans, thus explaining the termination.

It also referred to Bill's time as a factor. As any celebrity's personal tragedies and losses get raked over the public coals, so fandom's institutions, dreams and losses are also held on public display. Many of us who have been members of WISH have watched and cringed as, in the pages of INTERSTAT, in personal talks with friends, at cons, and wherever Trek and/or Shatner people got together, our 'dirty laundry' was aired. Some of us tried to warn, some of us patched, explained, tried to find creative ways to help. Some of us got hurt, angry or disillusioned and gave up, There was unrest in the ranks—perhaps, a lack of wisdom in the hierarchy.

But the end result—no matter the causes—was the same. It had ceased to be a working organization. The 'fellowship' part was fragmenting. Bill had a contract, in writing, with the powers that be within WISH. The contract had come to an end and it was time to re-evaluate. There was no sense in renewing something that was not functioning properly. As many of you have been witness, it was not improving, nor did the basic problems that existed show any signs of changing or rectifying themselves in the near future. Bill would have been stupid to have continued with it. That does not mean that Bill has rejected his fans. He has merely refused to renew a non-viable means of keeping in touch with them... Let us also remember that Bill has had some horrendous experiences with fan clubs in the past. Though WISH was head and shoulders above the rest, and for a good deal of its existence was a very good thing, it still failed to be a positive long term answer to Bill's problem of being just one man to several thousand fans that love him—an awesome ratio. He needs something that works, and will continue to work long term, but if he did decide not to authorize another fan club right now, could we blame him? Just how totally essential is his authorization to a fan club? If Bill decides against having another club authorized, what things can we still do? We can still have a newsletter. We can still have world-wide membership. We can still do a great zine. We can still pool our pictures (I think — don't quote me on it, legally) for a yearbook. We can still raise money for charities to be given in Bill's name. We can still support his career. We won't have the personal touch; the absolute knowledge of what's going on. Expense will be higher, quality of items perhaps less, we won't be able to quote or infer Bill's approval of anything we do. But we still can have a quality place to have fellowship and to support Bill in every way we can. May I encourage all of Bill's fans & WISH members current or past, to take heart, take stock of what we still have, pitch—in an orderly fashion please — to the support of what remains — and smile I That shouldn't be too hard.