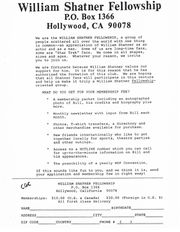 This club was formed when the William Shatner Fan Fellowship folded under various controversies.

It published The Shatner File and Kaleidoscope.

Helen Malloy and Karen Sue Kraft announced the start of a new William Shatner fan club in the April 1982 issue of Interstat:

Helen Molloy and Karen Kraft (formerly the membership committee of WISH) have been given permission by William Shatner to begin a new fellowship on his behalf. We know many of you have been waiting patiently for news, any news after Sonni Cooper and Susan Stephenson cancelled WISH, we wanted to make certain that we had official sanction of William Shatner and a signed agreement prior to any formal announcement of a new club. We now have such a document in our hands and are forming the William Shatner Fellowship with Bill's blessing. Many people, Bill included, felt that with Star Trek II being released in June, a new TV series, "T.J. Hooker", and increased activity among the fans in the now defunct WISH, efforts should be made to continue communication between Bill and his supporters. The William Shatner Fellowship will publish 12 newsletters a year, mailed first class, and have photos and shirt decal transfers available for purchase. For your $8 membership fee (USA) $16 (foreign) you will also receive a membership packet, including an autographed photo, list of TV and movie credits, bio, welcome letter and membership card. We are continuing only one aspect of the former WISH...regional assistants remain the same. Each of them was becoming very involved in their respective localities. Because we will not be using the WISH membership list belonging to Creative Enterprises, we are requesting that all applicants andthose wishing additional information, write to [address redacted]