By His Side is a gen Star Trek 336-page anthology "devoted primarily to the Kirk-Spock friendship/brotherhood."

An ad in Datazine #36 said it was a "serious look at best friends" and asked for "no humor/pun/satire." 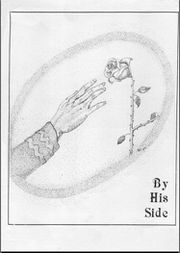 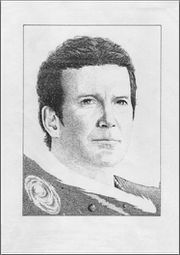 back cover by Chris Soto

It isn't really fair to mention how much I enjoyed this zine, because only enough copies were printed to cover pre-orders. But I'm hoping to coerce the editor/publisher into reprinting, because this is a zine that should stay in print for some time. In addition to some very promising newcomers, BHS includes fiction by more experienced writers such as Karen Rhodes, Lynn Syck & Laurel Ridener, and Ginna LaCroix. This would be an acceptable book from any editor, and knowing that this is a first zine makes the reading all the more enjoyable. There are rough edges, especially In the art and some production values, but there is so much heart and promise that I didn't mind the flaws. I returned to Florida just as Susan was struggling to the printer - only to have them close after printing a mere 60 pages. I made arrangements with my own printer, only to have them close up shop as well. The fact that BHS ever saw print is due to herculean effort on its editor's part. Send her a SASE and a nag to reprint: we need more editors like her.[1]