You may be looking for Brave New World, a Doctor Who zine. 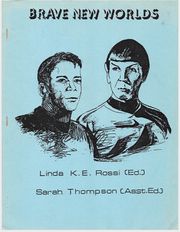 The art is by Gayle F, Barbara P. Gordon, Sarah E. Thompson, and Susan Wyllie. There is also art by ERIC, but it is not credited.

Some of the artwork for Brave New Worlds did not, unfortunately, arrive in time for this issue. I want to stress that I must have ALL work by the established deadline, unless previous arrangements have been made with me. CRYSTAL CONSTELLATION PRESS (of which BNW is a part) operates under three separate addresses. They are all connected, but—

I realize that family, work, school, and private lives must come before the fanzine, therefore, I endeavour to be flexible about deadlines. If there is to be a major delay in my receiving a promised submission, please let me know whenever possible. I am confident that some arrangement can be made to everyone's satisfaction.

In closing, I just want to let everyone know that there will definitely be a BNW II. I expect it to be out sometime around May, 1983. BMW II is still open to submissions of poetry, short stories, and artwork. Please send an appropriately-sized SASE if a return is requested.

A lot of you said that you are [Gayle F] fans. Well, then, don't miss a new K/S zine called BRAVE NEW WORLDS, which should be ready very soon, from Linda Rossi. It has Gayle's most glorious illos to date, for which she asked me to write a story — a privilege, believe me. If any of you should come to Chicago, give me a call, and I'll give you a guided tour of the original watercolor; it is unbelievably beautiful. What a shame Gayle won't be doing zine illoing or writing anymore. [1]

'Brave New World' turns out to be rather a Sad Old Place after all. Only one of the main stories adds anything to our understanding of this special relationship and that is the light-hearted piece of erotica, "The Golden Step" by Barbara P. Gordon, which interprets the accompanying [Gayle F] illos very well. The idea of Kirk as a dancer is delicious. Perhaps the story floats too quickly towards the bedroom scene, skimping on background details which might have fleshed this out into something more meaningful. There is potential here for a much longer story and I would have loved to read it all.

"The Enemy Within" by Linda Rossi and Sarah Thompson, the editors, offers a look at one of the double's possible acts during his brief existence. The residual weakening effects of the Psi 2000 virus in Spock's system permit his rape by the 'negative' Kirk, but I find it inexcusable that he should have apparently forgotten his ability to use a neck-pinch in order to save himself. Still, making allowances for that flaw in the plot, Spock's subsequent actions are believable. However, the writers should not have evaded the issues at the heart of things by leaving the story incomplete. The open-ended format is of course a perfectly legitimate one, but it does require some pointers to be given as to possible resolutions. Leaving the reader in total darkness at to what may happen later is a lazy way of writing. Also - as a minor quibble - surely it is too early in the chronicle for Kirk to know anything about plak tow?

'T'hy'la' by 'Kirk' I found difficult to follow. The story is told episodically, jumping from one point in the on/off relationship to another, dropping vaguely incomprehensible hints as to overall theme that never seem to add up to anything. If Spock has achieved something so incredible as the discovery of the true meaning and intention behind the disciplines of Kolinahr then surely it should have some more bearing on the story instead of being dismissed as an irrelevance?

If the lovers in "T'hy'la" seem to mean very little to each other, those depicted in Sharon F's "The Ruby Slippers" are immature to a fault. In addition the writing style is occasionally so over-indulgent as to be unintentionally hilarious.

The other main, story, "The X'Yesic" by Marcella Belton also has very little to offer anyone primarily interested in the K/S relationship. It makes some strange upon illogicality, culminating in a positively insulting offer by Sarek to a young woman who has already endured too much from the demands of this Vulcan society. Not quite a wife indeed! The story was cruel all the way through, the ending is unbelievably arrogant.

The editors of this zine could spend a little useful time with their dictionaries, punctuation and grammar manuals. It is high time, for instance, that fandom suggestions concerning Vulcan customs which are very hard to take, piling illogicality [missing words in original review] realised there are two distinct verbs, 'to lay' and 'to lie'. It is a shame that a zine with such an attractive overall look should be spoilt by such basic, correctable errors. [3]