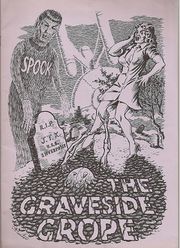 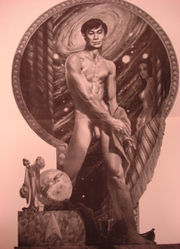 centerfold, portrait of Sulu by George Barr, also in Grup #2, see that page for more information about this art 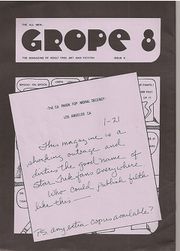 possibly the back cover, Steve Carr

Graveside Grope is an explicit het and slash 50-page Star Trek: TOS anthology. It has the subtitle: "The Magazine of Adult Trek Art & Fiction." This zine features a fold-out centerfold of Sulu by George Barr and a front cover by Alan Hunter.

It is a sister zine to Alnitah and eight other "Gropes".

From an ad in Universal Translator #22:

Graveside Grope' is our eighth issue, and another modern, glossy production. (Where are the crudzines of yesteryear?) Known to aficionados as the 'pop-up' Grope, this zine contains some outstanding features and should be approached with caution. All the wasted talents of British fandom are represented here; the rudest art had to be provided by our colonial cousins across the Atlantic.

to print posh than it does to use the office duplicator. In spite of the advance orders of the faithful I had trouble raising the cash and then, when all was safely gathered in, disaster struck in the form of a typewriter malfunction. The precious funds had to go on a new typer and we were back to square one. Moreover, I had to retype nearly all the zine since the new typeface showed up the old one to disadvan­tage. The snags have now all been ironed out and it should be a simple countdown to liftoff. How simple depends on whether I can get the Grope Squad together at Sol III in Birmingham to do some engineering work on the centrefold! If you get a loose page instead of a poke in the eye then I was unsuccessful and you'll have to do-it-yourself with a pot of glue and a bit of imagination.

The contributors to this issue have been wonderfully patient - I've been expecting them to succumb to withdrawal symptoms any time these last six months. The same goes for all those readers who sent me advance orders - some as long as eighteen months ago! There must have been times when they suspected that I'd run off to the Bahamas. But never fear! GROPE is alive and well-- slightly fatter than usual, in fact - like its editor.

I thought that with a title like GRAVESIDE GROPE I'd have at least one sad story where people die and things. On the contrary, the title seemed to raise our writers to new depths of hilarity. But at the last minute I was sent ever such a sad story by a couple of well-known Vulcan ethnologists. It's called "Obsequies", and I hope you all find it as heart-rending as I did.

All are long out of print and difficult to obtain. I sincerely hope that #8 won't be the last, since I quite enjoy the sly humor and artwork, and the offbeat but mature writing. You won't find any too serious/dramatic, overwritten, overly sentimental, sophomoric tear-jerkers here. The editor herself said, in the "Editor's Postscript" to SON OF GROPE: "...the zine as a whole is not meant to be taken seriously, though certain individual stories may bring a tear to the eye, a lump to the throat, a wrench to the gut, or up yesterday's dinner! GROPE began as a light-hearted romp and, I hope, will continue in that spirit. The stories and poems...do not necessarily reflect the views of the editor nor are they intended to present a workable Star Trek universe—not even I think that the big E can function with its First Officer permanently on heat!" Some American readers may find some of the British writing hard to get used to. It should be noted, too, that the majority of stories are not K/S. In this case, the ability to appreciate Infinite Diversity certainly pays off! [1]