YOU MAY BE LOOKING FOR THE AMERICAN ZINE SERIES, Obsc'zine. 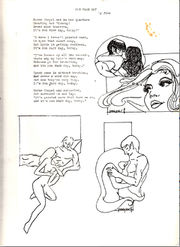 inside back cover, poem by Jinx, art by peeper! 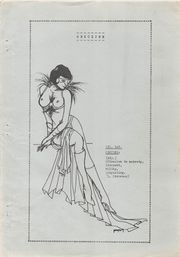 Obsczine is a 45-page gen, het, and femslash Star Trek: TOS anthology published in England in the mid to late 1970s. The zine is a slightly larger size, 12.5 X 9.

On the title page: "OBSCZINE: An obscene 'Zine. Dedication: To the Broad-minded, without whose help Star Trek would have never reached the screen."

The zine is mostly known for the story, "The End by Sei Aiy Khey." One fan described this as "that strange little zine from England, called OBSCZINE, which doubtless contains the world's worst "hurt" story (no "comfort" in this one!)." [2]

See reactions and reviews for The End.

See reactions and reviews for One Man's Mate.

See reactions and reviews for Reverie.

See reactions and reviews for A Surfeit of Ecstasy.

See reactions and reviews for And Then....

Please - don't go into too many details about that little horror in the UK OBSCZINE. I can't remember anything about the rest of the zine (I got rid of it) but that one was so nasty it stunk, and I still shudder whenever I'm reminded of it. The writer told me when the zine came out that she had wanted to write something that was really obscene - and boy, she did! The only thing worse was that hellishly well done poem (from a US zine) where Kirk and Spock are captured and Spock is hung up on a meat hook to make Kirk talk - and they're rescued too late to save him. [3]