Stylus is a gen letterzine by April Valentine. It was a discussion forum for fanzine editors on mechanics of editing, selecting, etc. The zine Blue Pencil was an attempt to pick up when "Stylus" ceased publication.

The Editorial in Issue 2

"We apologize for the delay in completing the second issue of Stylus, but it took this long to gather enough material. And therein lies the problem. ...We have almost decided to fill our obligations for three issues and then cease to exist."

From Boldly Writing: "This is precisely what they did. In the same editorial, they explained that although they received few contributions, they received a lot of support from subscribers... Meanwhile, Stylus made its best attempt to keep going, starting the issue with a list of suggested topics for articles. Articles in the issue covered topics such as editor/author relations, how to deal with criticism, and tips for writing fan poetry."

Stylus 1 was published in December 1980 and contains 26 pages. 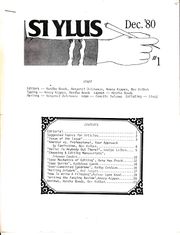 Stylus, a long-awaited publication, finally came out in December 1980, and although there are a lot of positive things to say about it, frankly, I'm a bit disappointed. The layout and the presentation were excellent. The printing was good quality. The form was presented in a very professional manner. My personal gripe is this: everything I read would have been good, useful information, if I was a new zine editor just starting out, or new to fandom. But what I was looking for was something that I, as one who has been in this game quite awhile, could use to change or improve the way I do things now. Everything that was written was true and born of experience, but I did not find that the experience conveyed to me differed from those of my own. Now, I know that every fan has at least one (and usually several) things that they can relate that is different from anything that anyone else has done. Please don't misunderstand; there were a lot of things I did learn form the articles in 'Stylus.' Hell, I'm using some of the things in Nancy Kippax's 'Writing the Fanzine Review' right now. And Mary Ann Drach's 'Some Mechanics of Editing' made some good points with particularly how she handles revisions with long-distance writers. Beverly Volker brings up the valuable point that one should always approach their writing and editing with a professional attitude, which is a reality we all tend to forget at times. I notice in the opening editorial this statement: "'Stylus' is a format in which writers, artists, editors, publishers, and consumers alike can exchange information." 'Stylus' is this, indeed. This publication has a worthy potential, and I wish to see it continue. What I would like to see are more articles that are a bit off-the-wall, unique personal encounters with situations or difficulties that the author had, and from which we can all benefit. I realize that this is the first issue, and that the first baby is always the most difficult. But 'Stylus' tended to lose my interest rather quickly, mainly because most of the contents were 'old hat' to me. [1]

The format of STYLUS is designed to give those in the creative aspects of producing zines (editor, writer, artist), a place to touch base, share ideas, and compare notes. The focus of STYLUS is improving the quality of the product. I was very favorably impressed with this zine; the articles were clearly well thought and well written including articles by Bev Volker, Leslye Lilker, Johanna Cantor, Kathy Carlson, Vel Jaeger, and reviews by [Valentine] and Volker. The topics range from Lilker's article, "Hello! Is Anybody Out There?" expressing the value and purpose of Letters of Comment and encouraging readers to respond to a writer's work, to Cantor's "Choosing and Editing Manuscripts" describing the sometimes delicate edit/or/writer relationship and some thoughts on how to avoid the pitfalls while still coming up with what is best for both zine and writer. There is also a list of topic ideas for prospective articles and an "Issue of the Issue"; a question just begging for comment. Artists are not left out of this zine, though the fact that many artists are just that, artists and not writers, could produce problems for this zine at a later date. This issue is well endowed with a detailed account, in Jaeger's "Mailing Artwork", of how to safely package, mail and receive word on the arrival of artwork. There is also an article by Kathy Carlson on "The Over-Committed Syndrome" and how artists can avoid it. "Copy Quicks" by Kathleen Shelley Lynch is to be a regular feature dealing with all of those common errors that writers are wont to make again and again, and that editors tear their hair over. In this issue, there was an introduction to the subject and the the its/it's -- lie/lay problems. Surprisingly, it did not turn out to be the stale English lesson that I was expecting, but became a delight to read because of Lynch's light touch and the 'Trek' written examples. The reviews in Stylus are in-depth reviews breaking down to the basic mechanics of the zine/story/stories reviewed as only an author/editor would. They are not your average reviews, and therefore fill a much needed gap in zine reviewing.... Stylus is, as the editorial says, 'a concept whose time has come.' It is warm, diverse, humorous at times, precise, informative, and easy on both eyes and the brain. My only real complaint is that at one point the reviewer of Enter-comm was, I felt, very harsh in her criticism of a story by an author that I had never heard of. It would be very easy for a zine to inadvertantly tread on a new crop of Trek writers and do real damage to the new souls just finding the courage to try their wings. I hope that STYLUS does not fall prey to this danger and in their zeal for improves ment forget the fact that we all had beginnings. STYLUS—an excellent zine for anyone serious about improving their craft, and very definitely worth your zine green. [2] 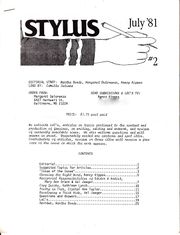 Stylus 3 was published in December 1982 and contained 28 pages. It was edited by Nancy Kippax, Margaret Delorenzo, April Valentine and Carolyn Verino. 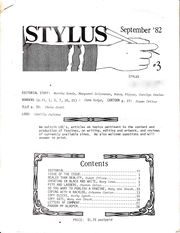 From Boldly Writing: "The editors hoped the addition of Carolyn would revitalize the publication. In the editorial, she announced, 'Stylus will be going on a twice-yearly publication schedule.' The publication still contained many helpful hints about fanzine publication -- for instance, Johanna Cantor contributed a short article on 'Coping with a Backlog' -- but issue three was the last issue published."