Cutters Goose is a gen Tales of the Gold Monkey fiction anthology. 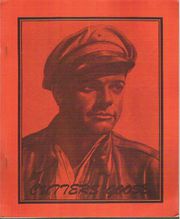 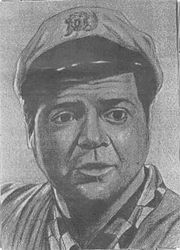 back cover of issue #1, Marilyn Johansen

Cutters Goose 1 was published in 1985 and contains 122 pages. The zine is online here as a pdf.

Well, "Tales of the Gold Monkey" may be off the air, but it's not forgotten. Over the last couple of years I've had the fun of writing to, talking with and, in some lucky instances, meeting "Gold Monkey" fans from all over the world. We've kept each other updated on what the former residents of the Marivellas are doing now, and we've discussed and dissected our favorite characters and our favorite episodes. The show has influenced us in ways we never expect. There are those of us who would now rather listen to the sounds of Glen Miller than the Beatles or study the inside of an airplane engine than worry about the klunking noise the car is making. For me, it's awakened an avid interest in the Flying Tigers whom, I'm ashamed to say, I had never heard of until I watched "Tales of the Gold Monkey". And watching Jake gracefully land the Goose on one engine - or less - each week helped me get over the white-knuckled [fear of] flying I was prone too. Other people probably think we're crazy to be so enthusiastic over what is, after all, only a television program, and a cancelled one at that, but I know that I've never known a more supportive and caring group of people than these fans. And talented!

When "Cutter's Goose" was first conceived, I really didn't expect much in the way of submissions. Lorie was the only other fan of the show I knew, but she wouldn't let me drop the idea. I swear she must have gone door to door looking for other Gold Monkey fans because I started to get contributions to our zine right away. Then the flyers went out and more people started responding. And each of them know someone else who loved the show as much as we did. Now look at it. Our baby has turned into an elephant (so what do you expect after 20 months in the oven?)! Everyone had something to contribute. If they didn't write, or draw, we got their encouragement and support for this zine. We finally had to reduce to fit all of this under my stapler and we still have enough material left over to seriously consider a second issue! So if this zine has inspired you at all, please submit your works of art, poetry, filksongs, and fiction to us. We'd love to hear from you.

We'd also love to meet you. The majority of the contributors to "Cutter's Goose" will be attending Most Eastly Convention in New York over Labor Day Weekend, 1985. It's a media convention being held at the Sheraton LaGuardia Hotel [snipped]. We won't be hard to spot as post of us will be dressing as one of our favorite Gold Monkey characters, and of course there will be a Gold Monkey party!. So please come. Or if you'd just like to correspond with other fans of the show, contact me and I'll put you in touch with other enthusiasts.

Tales of the Gold Monkey lives! And I think this zine proves it. I also think ABC and Universal should know that we haven't forgotten. Write to them and let them know what a great show you think it is. Who knows? Maybe they'll syndicate the show. Or better yet, maybe they'll do a Movie of the Week: "The Return of Tales of the Gold Monkey." Stranger things have happened! 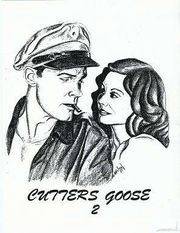