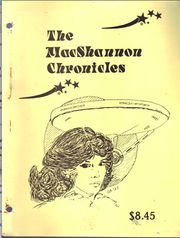 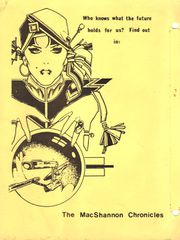 And for those of you lucky souls that have missed parts of the MacShannon saga, and want to delve into a case of "bad luck" there is the MACSHANNON CHRONICLES. Which is a compilation of all the MacShannon stories hence printed but now out of print. Including NEVER TIME, WITCH'S CAULDRON, DILMMA, and A FUTURE FROM THE PAST. Original artwork will be used, including works 'by Crouch, Gordon, Thorowgood, Carlson, and Brown. Page count roughly around 120. Publication planned for Oct '82. Currently accepting $3.00 deposits plus SASE for final notification.

Read and discover how a BSR operative finds herself teleported to the USS Enterprise, discover!how a certain captain begins to rue the day the transporter goofed. Discover how Spock finds himself facing an illogical situation, with only one logical solution (he, too, may come to rue the day, if he doesn't already...). Of McCoy, who finds himself MacShannon's cohort — not, always willingly — in her exploits. Of Scotty, who finds himself in the position of the "dutch uncle". Read and find yourself introduced to the Wolcyn culture, seemingly your normal everyday Observer race. But...are they?

I've been thinkin' (stop the groans, now) that considerin' ST II: TWofK, this wee section could be intitled - Spock's Folly. As Dallas would say, it doesn't always pay to be a hero. Okay, I'll drop the subject and get on to the purpose of this thin'.

Oh, yes, there really is a purpose'. And it be an explanation. (Which will probably confuse the issue, more than clear it up.)

First off—in every issue—pages 111 and 112 are one-sided; the last zine ad was a tad late gettin' in an' I dinn feel like tacklin' another stencil. The clone might of, but the clone was on vacation; the clone is always on vacation!

Secondly, a few of the issues have a few one-sides pages. Reason. The mimeo was hungry and ate more of the pages than I thought it did. (Frackl And I fed the thin' too; the cranky wee beastie!)

Thirdly, on the mimeo side, some of the text either went high or low. Though all the' text is on the pages—save for the page number in some incidents; I know, I checked. And if by chance I missed something, simply get in touch with me, and I will supply you with the missed section, page, or whatever. Okay?

And lastly, some of the print on the copier pages went light. Don't really know why; wasn't'the typer rib'bon this time. Could be the developer; something I have yet to talk them into lettin' me do myself. It'd save 'em a 35 mile trip, and I don't think it's just to see me—I'm not all that charmin'! The thin' also tends to grey the pages slightly when dealing with a large print run; I'll have to ask them about it too.

Well, I do believe that's enough of the "blah-blahs", right? I thought you'd all agree.

Another proposed zine in this universe was advertised in Universal Translator #16. It was a combination of two stories: "The Returning" and "Alone in the Dark."

From a 1982 description by the author:

I know I heard someone ask that—I just know I did. What follows this in sequence is, ALONE — IN THE DARK'. A post V'ger episode, where Domic takes his crusade against the Wolcyn Way a step further than planned, his mad genius has lent the conversion system the capability of passing into "the back of beyond" of the time/space continuums. What he encounters there rents dire consequences for Wolcyn, Klingon, and Federation spaces alike. It pits MacShannon, Kerlin — a Klingon agent—and the Enterprise against a mysterious foe — the Ziwa'hs. Their success or failure will determine the fate of the universe.

Also to be included with the above will be the novelette, THE RETURNING. Where MacShannon returns to the Enterprise to ready the Bivefi — a Wolcyn craft — hell bent to return to Genesis, or what was the Mutara Nebula. Is it to say her good-byes? Or something else? But her trip will not be solitary in nature. And just what will they — Kirk, McCoy, Saavik, Sojak and MacShannon — find there? An end? Or a beginning?

Both of these are at the rewrite stage and need an artist. Please contact me if interested. For further information please SASE. The publication date is

tentatively set for the latter part of '83.

This zine was not published, at least not in this form.

In 1984, another proposed zine was in Universal Translator #22 and called "'A Hawk in Passing' -- "There's trouble on the home front, and McCoy becomes the target of wanton advances. From there, the plot thickens."

These stories cover the adventures of Samantha MacShannon, alien, human and cibernetic [sic] to boot, with a good part of telepathic ability as well. MacShannon is the central character with a little help from her friends Kirk, Spock and McCoy, with a support cast of the rest of the crew of the Enterprise.

The characterisation is pretty good and the author stays within the expected lines well enough. No major surprises along the way. A good bit of humour throughout to perk it up a bit. Samantha's had a romantic involvement with one of the crew. If you wish to know who, you will have to buy the books or borrow it, as I did. Another little piece of information... Samantha is a product of 20th century engineering ... [1]