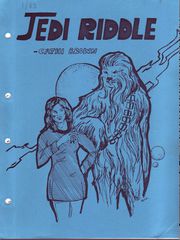 Jedi Riddle: Tale 10 of the MacShannon Chronicles is a gen crossover novel written by Cathi Brown. It has 244 pages and has interior illustrations by Melody Rondeau. The front cover is by Bonnie Reitz, and the back cover is by Virginia Lee Smith.

Vader makes off with Spock in hopes of entrapping the 'e' epa. MacShannon goes off to the rescue, but she ends up rescuing Starbuck. Together they start off to Tatooine, but en route run into Lando and Chewbacca and go after... you got it!!

THE JEDI RIDDLE -- a SW/ST/BG novel by Cathi Brown. A "weird" one where Vader makes off with Spock in hopes of entrapping the 'e'epa. MacShannon goes to the rescue—without a certain captain's said permission — but ends up rescuing Starbuck, (Vader has been busy, see... ) Together they set off for Tatooine where information may led them to Spock, En route they run into Lando and Chewbacca, and join forces... but first they must de-frost Han. Then their get away is hampered by a trio of space debree [sic] ... At last peck Indy Jones makes a guest appearance, Apollo makes the cast too. This thing of sheer madnoss is being illustrated by Melody Rondeau,

$3.00 deposits with an SASE for final notification are being accepted. Publication date being March 1083 [sic] — at least that's what I plan.

From the zine itself:

What you are about to read is pure fantasy, and should be taken as such. It was written for fun and the love of mixed universes, and with contributing madness by Denise Habel, among others. Now, read on if you dare.

Another proposed zine in this universe was advertised in Universal Translator #16. It was a combination of two stories: "The Returning" and "Alone in the Dark."

From a 1982 description by the author: 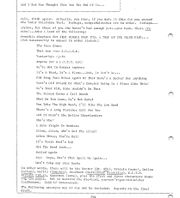 some 1983 proposed stories for the never-published issue #2 of "Jedi Riddle," which was to have been subtitled: "A Trek of the Weird Kind.": "The publication date of this. .. thing. ..is anyone's guess at this time. And bear in mind that it took me two years before i finished Book One} But, you wish to venture into further insanity send in your SASE and I'll keep you posted on its development." 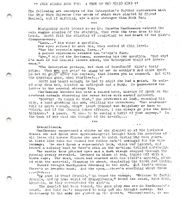 some excerpts for the never-published issue #2 of "Jedi Riddle," which was to have been subtitled: "A Trek of the Weird Kind."

I know I heard someone ask that—I just know I did. What follows this in sequence is, ALONE — IN THE DARK'. A post V'ger episode, where Domic takes his crusade against the Wolcyn Way a step further than planned, his mad genius has lent the conversion system the capability of passing into "the back of beyond" of the time/space continuums. What he encounters there rents dire consequences for Wolcyn, Klingon, and Federation spaces alike. It pits MacShannon, Kerlin — a Klingon agent—and the Enterprise against a mysterious foe — the Ziwa'hs. Their success or failure will determine the fate of the universe.

Also to be included with the above will be the novelette, THE RETURNING. Where MacShannon returns to the Enterprise to ready the Bivefi — a Wolcyn craft — hell bent to return to Genesis, or what was the Mutara Nebula. Is it to say her good-byes? Or something else? But her trip will not be solitary in nature. And just what will they — Kirk, McCoy, Saavik, Sojak and MacShannon — find there? An end? Or a beginning

Both of these are at the rewrite stage and need an artist. Please contact me if interested. For further information please SASE. The publication date is

tentatively set for the latter part of '83.

This zine was not published, at least not in this form.