A Collection of Dreams 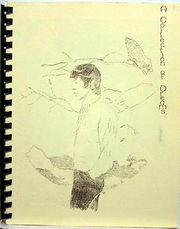 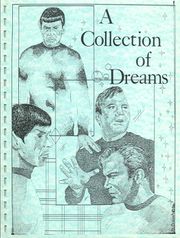 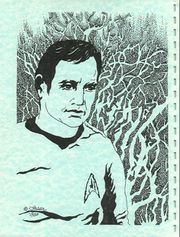 back cover of the 1986 edition, Vel Jaeger

A Collection of Dreams is a 124-page slash anthology of short fiction & poetry based on the 'Dreams of the Sleepers' universe by Alexis Fegan Black.

There are two editions: 1985 and 1986. It is unclear if the cover is the only thing that differs between them, or if there is a difference in content as well.

Well... what's an editorial for other than to express personal opinions? Actually, it's for giving the readers some insight into the zine, which is what I'd also like to do. A COLLECTION OF DREAMS is a collection of short stories, poetry, vignettes and artwork set in the DREAMS OF THE SLEEPERS universe.

First, I'd like to say that I'm very flattered there has been so much interest in this universe, and to personally thank everyone who contributed to ACOD. The stories and poetry have been especially inspiring, to the point that I'm really looking forward to working on DAYBREAK—the third and most likely final chapter in the DOTS Universe. The story in this zine entitled DAYBREAK is actually the prologue, to the novel - which I'm hoping to finish this winter. Er... maybe it's just psychological, but I can't seem to write in the freezer-frame-of-mind in the middle of a summer heatwave. *Sigh* So... while DAYBREAK is certainly a "strange" story, I'm hoping that it works, and that it will give you a basic idea of what's ahead in the third novel.

Many people have written to ask, "Do they get out in the third novel?"

Well... telling would be cheating, but I can promise at this point that it will not have an unhappy ending and that it will not be an ambiguous ending. It will be in black and white and will hopefully tie up loose ends and reunite old friends. It will also introduce new characters as you will see in DAYBREAK, and, with any luck, will rattle a few possibilities around in the mind. Since the third novel is not yet written, I am very interested in feedback on DAYBREAK and on the zine in general. Let me hear from you with any ideas, comments or suggestions.

I would also like to say in this editorial space that I have been very pleased to meet so many fans during this summer, particularly at THE 20th ANNIVERSARY CREATION CONVENTION in Anaheim in June, and at SHORE LEAVE in Baltimore. It's really nice to talk to fellow K/S-ers and to share new ideas on all fronts. It seems that the K/S "movement" is growing - something which I suppose we could thank a certain someone who put a certain something in his "professional" hardcover book. Before that "editorial comment" on K/S appeared, we were basically a very underground group, but I'm rapidly discovering that K/S is downright appealing to a lot more people than this certain someone might have imagined when he sat down at the typewriter to "blast" the K/S ladies". Anyway, it's been a very pleasant experience meeting new friends and gettinq re-acquainted with old ones.

Also, on a different subject, I have decided to try a new K/S-oriented letterzine. I would like to try an approach somewhat different than NOT TONIGHT, SPOCK, though the fine quality of NTS makes it difficult not to adopt a few of their ideas. Since K/S fandom \s growing, I've felt for a long time that we could use as many informative publications as are feasible. Tentatively, the title for this new zine is ON THE DOUBLE, and I'm currently accepting ads (free to fanzine editors) letters of comment on any K/S-related subject, and—especially - reviews of K/S fanzines.

I am hoping that the readers will want to become involved in a publication like this, and that I'll hear from some of you with suggestions, letters and what-have-you. At this point, I am hoping to make ON THE DOUBLE a reader-participation zine, similar to an apa, but open to any K/S fan at any time. Current.listings of K/S zines will be included, as well as any items of interest the readers care to include. No pub date for the first issue yet, though SASES are being accepted and kept on file.

This zine is a collection of short stories, poetry, and art set in the time-frame of the editor's Dreams of the Sleepers universe. I'll admit that when I ordered this zine, I wasn't expecting too much -- as it's difficult if not impossible for other writers to work in the limitation of another's universe. But I was was pleasantly surprised to discover that ACOD contains several new ideas and some extremely poetic re-hashings of the now-established situation. 'The Island' is an excellent insight into the despair often associated with the DOTS universe, yet as with the original novel, this short vignette also shows hope for the characters through a poignant and touching style. 'The Night' has a similar format and fell, and these were among my favorites in this zine. 'Forbidden Trees' is told in dialogue form, and is touching, humorous, heartbreaking, and uplifting all at the same time. Highly recommended. 'Answers in the Dark' was another finely-written story which introduces new characters into the situation, and which gives the reader a chill with some of the twists and unexpected turns. 'Human Sacrifice' is another chilling little vignette, told in the 'I' form from Kirk's point of view. An eerie 'what-if' piece dealing with Starfleet's possible involvement in the entire scenario. The two stories which I didn't personally enjoy were 'Even Dreams Do Not Last Forever' and 'The Break.' While both were well-written, I just didn't get the 'feeling' I've learned to associate with Ms. Black's DOTS universe. 'The Break' did, however, offer a 'what if' situation that Ms. Black may have to content with in the next novel. My favorite piece in the zine was 'Daybreak.' While the second novel in this series, 'The Fifth Hour of Night' was less chilling than the first, 'Daybreak' picks up the pace once again and offers some startling possibilities. Once again, the reader is treated to the mind-bending idea of 'What if Star Trek never existed?' And now that is does exist, the reader begins to wonder his/her responsibility to the future has become. We are told that 'Daybreak' is a prequel to the third (and final) novel in the DOTS universe, and it that third novel is as well-done as this short story, I can't wait to see how it all turns out. The poetry in ACOD is excellently written and, often, nicely illustrated. I was particularly impressed with 'As Shadows Stand,' 'Ice Dream,' "Butterfly Dream,' and 'The Tear.' The artwork in ACOD is basically unremarkable, though the front cover, as well as the inside front and back covers beam special mention for their neatness and the feeling they captured. All in all, I found ACOD to be an enjoyable read -- humorous at times, often chilling, always thought-provoking. But, as a warning, this zine should only be ordered by those who have already ready read Dreams of the Sleepers and/or The Fifth Hour of Night.[1]