The Fifth Hour of Night 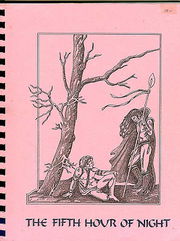 The Fifth Hour of Night is a K/S slash Star Trek: TOS 154-page (some issues have 136 pages) novel by Alexis Fegan Black. It was a Surak Award nominee for Best Novel and Best Editing.

THE FIFTH HOUR OF NIGHT may not be xeroxed, photocopied, sanscrited, telepathically reproduced, or otherwise copied in any form without the written consent of Pon Farr Press. Anyone caught doing so will be sent to bed with Dr. Richard Meade and then thrown into permanent hibernation.

From On the Double: "Was even the escape from cryonic suspension another illusion? The adventure continues, the relationship grows."

From Datazine #38: "This picks up immediately where DOTS [left] off. Kirk and Spock confront their own reality -- what it is, what it isn't, and how they must learn to work in the parameters of their astral existence. New Earth technology has made it possible for their captors to extract vital information directly from the 'sleeping' mind; and if Earthmen misuse this information, the future will be obliterated, Kirk and Spock may never regain their freedom, and the Enterprise could fall into the hands of war-minded 20th century humans. An in-depth exploration of the statement: 'there are always possibilities.'"

In the midst of it all, the Futura Technics complex remained unscathed, a seemingly dormant blotch on an otherwise unmarred hillside. Time did not touch it, did not reach her demanding fingers deep into the underground facility where sleepers dreamed of freedom and cold tunnels twined around the eerie establishment like serpents guarding a sacred tomb.

Spock was aware of Kirk at his shoulder, of the warm and silent figure which represented his last remaining hope. With an effort, he chased the melancholy away, turning instead to face his companion.

Kirk smiled faintly, reaching to touch the Vulcan on one arm as his eyes scanned the eastern horizon, watching the storm which was as much a part of him as it was around him. "You okay, Spock?" he asked.

For along time, Spock did not reply. He had no answer. Part of him wanted to crush the human to him, disappear into some fantasy where time and memory could not touch them. "I am… distracted by the storm," he murmured, not knowing if the distraction was from the rain on slick-paned windows, or from the fire which burned within...

This is not a "sequel" to DREAMS OF THE SLEEPERS as much as "Part Two," according to the author, since TFHON takes up exactly where DOTS left off. Whether this novel is a "sequel" or a "second part" matters little. The simple fact is that it is enchanting — in the same disturbing way that DOTS is enchanting. As TFHON begins, we are privy to the events which eventually wind up putting Kirk and Spock directly back in the 'existence' they faced in DOTS ... or were they ever away from that 'existence' in the first place? A good question, answered — sort of — in TFHON. Actually, this zine is basically more of the same experiences we found in DOTS, but at no time does Alexis lose her audience, her trend of thought, or her sense of mystery, hope, gloom, liberation, grandure, and amazement. The story moves smoothly — and too fast for my liking, I want more of it! — through events which simply cannot be discussed without giving away key points of the story. And maybe that's the best testimonial a story can receive: there are so many intricacies in TFHON that one can't discuss any of them without giving the plot away. The story is constantly in flux; constantly taking shape, form, and a life of its own. In TFHON, we get to see much more of Ariel Pierson, and are allowed to feel her growing frustration as she tries to deal with a situation for which she feels responsible in the first place. We also get small, but highly intriguing, glimpses of some 'natives' of the 1980's and how they are drawn into a reality too bizzare to believe. While time has stood still for Kirk and Spock, such is not the case for Doctors Meade and Sawyer. Age, bureaucratic red tape, illness, frustration, time, and a touch of insanity have affected the good doctors in highly different ways. The outcome of their years of dealing with The Sleepers figures highly in TFHON. This is a compelling story whieh is far from its end . . . even at the end of the zine. Alexis hints strongly at her own belief in the events of DOTS and TFHON . . . and has made me a believer as well — which is, at the very least, the sign of a fine writer. Anyone who has ever thought that there might be more to Star Trek than a television series, anyone who has ever looked up at the sky and thought that they saw something move that shouldn't be there, anyone who has ever wondered about the Air Force's tight-lipped policy about discussing UFOs will find more than a little to interest them in TFHON. As for the K/S aspects of TFHON, they work well and are incorporated in the plot so as not to detract, but only enhance, it. Throughout TFHON, there is some lovely poetry by Alexis, Keith Donovan, Wendy Rathbone, Dovya Blacque, and Diane Tessman, some of the best writers in fandom today. All the poetry adds greatly to the whole, bringing the views of these other authors to Alexis' main body of work. TFHON has one of the most gorgeous front covers I've ever seen . . . and one of the most disturbing beautiful back covers, both by Marilyn Cole. The price of the zine in nearly worth the cover alone. Additional drawings and graphics by Carol Pierce, Ann Crouch, and Chiya are icing on the cake. This is a highly recommended read, one which will, at the very least, leave you with a lot to think about. Alexis has written several separate stories, published poetry by various authors involving the DOTS universe (published in NAKED TIMES 7 and 8), and suggested an entire zine based on DOTS universe stories/poetry/art. I'd love to see it, so entranced was I by the story in DOTS and TFHON. [1]

The Fifth Hour of Night takes place some years later [after Dreams of the Sleepers]. McCoy and a security chief have infiltrated the Futura Technics building. Kirk is often desperate if he and Spock will ever be normal again. He misses his friends and the stars desperately. Spock tries to force their captors into reawakening his body by summoning pon farr. By being in his astral body, it is possible to put forward Spock's time of pon farr. His body is re awakened and he is drawn towards his suspended body. When he awakes in his body he finds out that Kirk is in his body as well. Lt. Pierson, the security officer of the Enterprise who has infiltrated the building, helps Spock's body through the pon farr, but is unable to put him free. At least Spock's body is put to sleep again. They awake in the astral world again, in their own astral bodies. It ends when they are in a very real fantasy—so real that Kirk doesn't know anymore if it is real or not. This is a well-written story, but it babbles a bit. This second novel is a bit superfluous. The story of their attempt to reawaken by Spock forcing Pon Farr is unlikely, as is their being in the same body. It is a bit long-winded and did not always keeps my attention. But again, their various fantasies in making love are... interesting. [2]