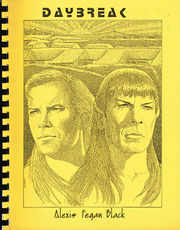 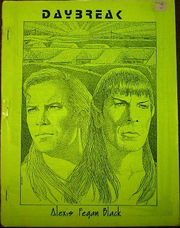 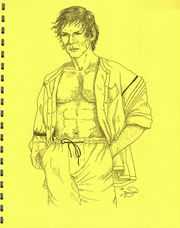 inside back cover, Dragon 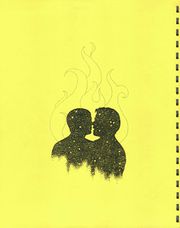 Daybreak is a K/S slash Star Trek: TOS 154-page novel by Alexis Fegan Black. It has the subtitle: "Dream Come True." It won the 1987 Surak Award for best novel. The art is by Chris Soto, Dragon, Chiya, Shellie Whild, and Jacquelyn Zoost.

Publisher's summary: "After the Eugenics Wars, Kirk and Spock encounter a band of survivors who are willing to help them effect escape, but nothing is as it seems."

Summary from Media Monitor: "This is the story of the 1980's - almost 25 years after Kirk and Spock were first taken captive by the US government. Our world has changed, and out of the ashes has arisen a new sub-culture--one which will chill you and make you wonder what lies ahead for us all."

Summary from Gilda F: "Pulled some years ahead of where they were, Kirk and Spock run into a band of survivors of the Eugenics War and see in them a way to finally get home."

Spock allowed a faint smile to touch his lips. "What matters is that we will be free, Jim," he promised. Then, lapsing terribly from logic, he added: "And considering your determination and your abilities, I have no doubt that we will construct a bridge back to the stars if necessary."

For a moment, Kirk couldn't breathe as the full force of Spock's love overwhelmed him. Without words, he joined the Vulcan on the tattered mattress where they had spent the night. Silently, he leaned against his companion, resting his head on the warm blue-clad shoulder. Whatever happened, he told himself, they would be together. Life or death. Resurrection to the heavens or an eternity suspended in hell.

Kirk snuggled closer. Together they'd fought at Hell's symbolic gate more times than he could count. Now, he told himself, it was time to storm those gates and banish all the demons. Suddenly, he felt strong again…

I dunno. Maybe the moral of this third novel should be; "There are some things we have to do to remain true to ourselves."

As I mentioned in the epilogue of DAYBREAK, I very much wanted to give this novel a nice, happy little ending — where the boys go home and the universe lives happily ever after. As a star Trek fan, and as a K/S fan, and as a usually-nice-person, that's what I originally intended to do with DAYBREAK. But, as a writer who likes to give her characters a fairly free rein, it just didn't work out that way. I could have forced it. I could have tied Kirk and Spock down in Sickbay with words and sent them gleefully back to their own century. I even wrote it that way to see what happened. It didn't work is what happened. So I sat back down at the computer and said, "Okay. Have it your way, guys." And then it worked. I didn't "like" it; but it worked. Sometimes, particularly in fandom where we're all among friends, the temptation arises to write what the readers want to read just because we know it'll be well~received and widely enjoyed. And yet, after writing three novels in the same "universe", I knew I couldn't do that this time. This one, I admit, is for me, and I apologize if anyone is offended or disappointed by the content of DAYBREAK. At any rate, that's the "why" of it. Aside from that, I really enjoyed writing DAYBREAK, and I hope I've been able to capture a few new ideas and scratch then down on disk before they got away — as ideas have a habit of doing. X truly hope that you have found something enjoyable or entertaining in this final novel in the DREAMS OF THE SLEEPERS universe; and I welcome comments from anyone who might want to write. As for the future of DOTS, I do not plan to write any more novels in the universe unless the urge strikes me in the middle of the night. And if it doesn't, I plan on rolling over and going back to sleep. Also, I would like to thank all the other writers and artists who have contributed to this tome, and a special word of gratitude to Diane, Alayne and Wendy for support and patience above and beyond the call of duty. I couldn't have done it without you. I do thank all of you for your support and letters of comment on this universe over the last two and a half years, and I look forward to hearing from you again soon. In the meantime — "Sleep well."

May all your dreams be beautiful...

DAYBREAK is the third volume of the DREAMS OF THE SLEEPERS trilogy. If you have not yet read DOTS and its sequel, THE FIFTH HOUR OF NIGHT, you will be cheating yourself of the full scope and effect of this epic. By all means, read the first two volumes before reading DAYBREAK. The story opens with Kirk and Spock still imprisoned in the astral plane, their bodies in cryogenic suspension in the 20th Century, where they have been for many years. They are pulled to a locus in time, a turning point, and encounter a small group of survivors of a devastating war. From here, subsequent events lead eventually to their release — at last — from the cryogenic chamber. But along the way, we are treated to some truly fascinating twists & turns of plot that will give you a new slant on reality (if you don't already have it). There are some profoundly intriguing possibilities expounded throughout the story that are guaranteed to keep you thinking, right up to the inescapably logical, heart-renderingly elegant conclusion. I realize there are not many plot details here, but this is not a book report; it is an opinion and any more description of the story would remove a lot of its suspense. It is a beautiful piece of work, and should not be passed up by anyone with an IQ above room temperature. [1]

The Fifth Hour of Night sets the events for what is going to happen in the third novel, Daybreak. In the prologue Kirk discovers that he is still in the astral world and he is desperate. Suddenly he and Spock are taken by a kind of time-jump to the future and find Earth destroyed with only a few survivors. Those people, led by Captain Jack, know Kirk and Spock and they appear to be fen of a TV show, shown on TV during 30 years, called Star Trek. They also meet McCoy, who is insane. Spock is able to give McCoy back his sanity. At the end McCoy and Captain Jack and his men are able to revive Kirk and Spock. Spock discovers something called a time-loop. When they return to their own time, he is not certain if it is possible to return there before they go back to the sixties. If not, all will be in vain and all what they have been through will be repeated endlessly. They promise each other at least to remember their love for each other. Then Kirk and Spock make love for the first time in a physical body, and that is a really beautiful scene. Alexis is a very talented writer, and she has painted a totally new world. I am interested in metaphysics, so I read it with much attention. I read it twice. The whole story has a very good plot, well considered and plausible and yet sometimes I was bored, sometimes it took too long to come out of a scene. And though I found the idea that Star Trek is based on real people, that Gene was looking in the future when he first wrote of Star Trek, intriguing, I didn't like it. I want the real world and Star Trek kept apart. I think of Star Trek as a different universe, not ours. I know, it is the basis idea of the story, but it didn't work for me. The technical details are incredible good. What's told about time loops and how time is reacting upon time sometimes left me a little dizzy. It all sounds very real and logical to me. The characterization is good. Spock is more himself and can handle being in an astral body quite well, because he is more a mental than a physical man. In the astral world he is more of a leader. For Kirk it is very difficult. He can't go to his beloved stars. He can't go far from his physical body. He misses his ships and his friends and he feels helpless and doesn't like always relying on Spock in mental matters. He always was a more physical man, needing to touch, misses that desperately. He is struggling with himself to accept his situation but he doesn't succeed completely. Sometimes I found Kirk a bit too helpless. It is not like Kirk to stand aside and do nothing. Though it is a long read, and not always very pleasant due to the layout (very small printing), the story took me on a journey into an undiscovered country and it left me thinking about what is real and what is fantasy. If you haven't read it, please do, it is well worth it. [2]