The Surak Awards were created in 1986 when some Star Trek fans were upset that the Fan Q awards didn't seem to be paying enough attention to Star Trek as they used to.

The "Memory Alpha Award" was a subset, given to one fan a year for a "history of distinguished achievement."

description from the first year's form, click to read 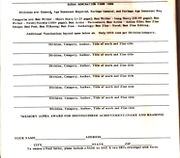 form from first year, from Datazine #45, click to read

In 1989 and 1990, the Surak Awards were voted and announced at Koon-ut-Cali-Con, a K/S con, implying that relations must have been fairly good between the K/Sers and genners in Star Trek fandom at the time.

The 1990 awards were the last to be held. The editor of The LOC Connection proposed a new award, called the TLC Awards.

A couple of odd things happened in the Star Trek category in 1986. First, as reported earlier, Rosalie Blazej and Kin of the Same Womb Born got on the ballot, despite the fact that the story had been published in 1984 and was not eligible. Rosalie and her story were subsequently withdrawn. Second, No Award won for best Star Trek fanzine and best Star Trek poet. (Syn Ferguson won for best Star Trek writer for Courts of Honor, but hers was the only name on the ballot after Rosalie's was withdrawn; and Caren Parnes won for best Star Trek artist.) Kim Dyer, the Fan Q administrator, explained: "'Please make sure your readers know that if the guidelines for keeping a category were in force last year, there would have been NO Star Trek categories'. The Fan Q administrators made some changes because of these events. First, nominees were required to document their year of publication. Second, voters were explicitly informed that "No Award" meant "none of the nominees in this category are worthy of receiving an award." (Apparently many fans voted No Award because they felt they must vote in every category, and if they were not familiar with the category, they checked No Award instead of skipping the category and leaving it blank.) A group of fans responded to the lack of Star Trek nominations in the Fan Qs in a different way. These Star Trek fans created their own award, the Surak Award. The originators of this award discussed the idea with fans at several Star Trek conventions, including KC Con, where I attended an organizational meeting. Because they found a consensus among many Star Trek fanzine readers that such an award was needed, the Surak Award was formally announced at the end of 1986, and the first awards were given in 1987. The administrator was Kelly Tower of Southfield, Michigan, but there was an operating committee of 8 fans, and an advisory committee of 21. 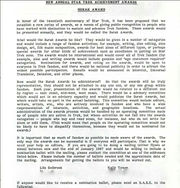 From a flyer printed in Interstat #109:

In honor of the twentieth anniversary of Star Trek, it has been proposed that we establish a new series of awards, as a means of giving public recognition to people who have worked with distinction to sustain and advance Trek fandom. These awards would be presented annually, and they would be called the Surak Awards.

What would the Surak Awards be like? They would be given in a number of categories and would include a range of fandom activities; for example, writing, zine editing, zine design, art, filk musiccomposition, awards for best zines of different types, or perhaps special awards for other kinds of achievement such as excellence in putting on Star Trek cons. The awards would be international and would cover all of Trek fandom (for example, zine and writing awards would include genzine and "age statement required" categories). Nominations for awards, and voting on the awards, would be open to everyone in Trek fandom, and there would be national publicity in order to attract the widest possible participation. Results would be announced in Interstat, Universal Translator, Datazine, and other places.

How would the Surak Awards be administered? So that the awards will be truly representative, they should not be attached to any one con, or any one group within fandom. Each year, presentation of the awards would be rotated to a different con by region — east coast, mid-west, west coast. There would be a advisory committee which would act in an advisory capacity and would publicize the Surak Awards, but which would take no part in the actual balloting. This committee would include editors, writers, artists, etc., who are actively involved in fandom and who have a wide representation of interests, activities, and geographic locations. The actual administration of the awards process would be handled by an operating committee made up of people who are active in Trek, but whose activities do not fall into the awards categories — people who buy and read zines, for instance, but who do not write for zines or edit them. (This would mean that people on the operating committee would not be likely to have to disqualify themselves, because they would not be nominated for awards.)

It is important that as much of fandom as possible be made aware of the awards. The only way the awards can be successful is if everyone will participate. That is why we need your help as editors. If you are going to be doing a mailing (either flyers or zines) between now and the end of January 1987 and would be willing to include a nomination ballot with the mailing, please contact the committee at one of the addresses listed below. Please include the number of ballots needed and the approximate date of the mailing. Arrangements for getting the ballots to you will be worked out.

The awards were evenly split between USA fanwork, and non-USA fanwork, then divided again between General and Age Statement Required fanwork. Awards were given, not best short story, or best long story, but best Writer. No award was given unless there were at least three nominations in the category. The awards were promoted in the adzine Communications Console.

The full set of categories included, each awarded for US and Other Than USA:

For a sample of fanzines and stories that won the Surak Awards across the years click here.