A Human Thing to Do

A Human Thing to Do is a K/S story by Vivian Gates.

It was first published in the print zine KSX #2. 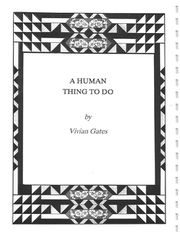 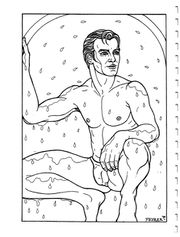 "Kirk picks Spock up after Spock completes a mission where he had to pass as human, and spending the day together, Spock speaks of being seen and treated as a human-and the human things he would wish to do."

This story takes place in the aftermath of a solo mission where Spock had to appear as human. Kirk accidently runs into him at a bar on the mutually-agreed-upon rendezvous planet, and sees for himself for the first time what Spock would look like if he had been born with human features. The author then leads us into a fascinating (sorry) discussion between Kirk and Spock where Spock tries to articulate his discovery that people (strangers) relate to him much differently as a human than when he is Vulcan in appearance. Ms. Gates handles this in an intelligent and believable fashion, starting with Kirk's non-comprehension of Spock's discoveries, to his gradual understanding of what Spock is trying to point out (that his alien-ness when he appears Vulcan brings more stares and awareness by strangers, and subsequently less privacy, than when he appears human). There is more discussion as to what makes a person a person - his external features or his internal personality and characters - again handled with directness and clarity. Spock leaves Kirk for a while in order to participate in an activity that is strictly - Human. He discovers that his external appearance is not what is preventing him from being or doing human things, but instead that it is the limitations that he places on himself. Of course what this is leading up to is Spock wanting Kirk as a lover and mate. The way the author brings that about is beautiful, poignant (sometimes a bit heart breaking) and is so close to my own idea of how Kirk and Spock would react and interact, that I couldn't help but love this piece. I think it is one of the best stories that Ms. Gates has written. My only quibble is I found myself a bit confused at the end when Spock admits that kissing and loving his Captain wasn't the human thing he'd planned on doing - it was something else. And that something else is never explained. But that is a very minor flaw in an otherwise wonderful story by one of K/S's best writers. Thank you, Vivian Gates. [1]

Spock has had cosmetic surgery to look human in order to accomplish a mission. The story concerns itself with Kirk's reaction to his appearance and to their expression of love for each other.

To complete the picture of Spock being human, he drinks beer and talks like a regular guy. He eats a snow cone in the park with Kirk after a bizarre exchange about how eating anything icy can be harmful to him (?).

Spock's observations about his human appearance are kind of weird. He tells Kirk that people have always stared at him and in one of the strangest things I've ever read, he says:" 'I have had small children burst into tears at the sight of me.'" What is he, for goodness sake? The Elephant Man?

For the most part, anyway, despite lengthy discussion about Spock's appearance before and after, I never understood exactly what either of them really felt. But they continue to discuss it all through the day with a walk in the park and a picnic I particularly was struck by the interchange about the link with T'Pring that didn't form properly because a link is like "a seed" and Kirk asks:" "Where was the gardener?'"

I also hadn't a clue as to the purpose of the "holo-pool". It's a real swimming pool with real people along with some holographic bathers. Why?

Later Spock kisses Kirk and they have a dry, rather distant discussion about their potential relationship. I wanted to enjoy lines like:" 'One kiss. To remember. To know what it is like.'" and " 'You have had hundreds of kisses. It is just one more," but I had to ignore too much other stuff.

When they go to the hotel room together, it could have been really nice and in fact there are lots of nice things said, but then I had to ignore their seemingly complete ignorance of matters sexual. Perhaps it was meant to be a kind of foreplay where Kirk would tell Spock what to do. Instead it came across as strange especially when Kirk tells Spock what he's supposed to do with his penis, even thinking not to use any other term for it because Spock won't know what it is (!). And here we have a "packet of lube". And "...the hearty physical excitation Spock was delivering..."

Most of this author's stories that I've read have been good to excellent. If I see her name listed in a zine, I definitely consider buying it. However, this particular story is uneven at best, and I get to criticize because this author is usually so proficient. [2]

Spock has been on a mission disguised as a human. It doesn't really matter to this story what the mission was, but it was a great scenario, would have been a fascinating story if the author had chosen to focus on it. Kirk joins him after the mission on the planet.

I love the idea of Spock having studied to act like a human. He likes how nondescript he looks; no one stares or avoids staring at him. This is fascinating—this is very different for him. He talks about this with Kirk. It's a very beautiful, quiet talk they have, walking in a park, sharing a meal, a sweet conversation between very good friends, very insightful for Kirk. Gentle questions, thoughtful answers. Very subtle and perceptive.

Spock wants to do something normally denied him by his Vulcan appearance. He comes to the conclusion (I think-this was not perfectly clear to me) that what he really wants is not denied him by his Vulcan appearance, but by his own limitations. So he kisses Kirk. This is a gorgeous, surprising moment. From here on I was clutching my heart, so beautifully tense and sweet. Spock's love is "human in substance, Vulcan in strength.' Wow.

After the kiss, Kirk is flustered. "Did you mean to kiss me like a lover?" Spock says he did. Great scene! So it all comes out. Beautiful intensity. Not writhing-passion kind of intensity, but so achingly sweet and heartfelt. And some absolutely exquisite lines. A marvelous awakening of their love.

I love when Kirk, standing with his arms around Spock, says in words what they should do (Spock being admittedly inexperienced). A preciously sexy scene, and Spock comes in his pants. Kirk takes the lead then. Beautiful scene, delicate sexual nuances. Spock is a fast learner of course. His passionate need is exquisite. Kirk had never made love to a man, never been fucked; instant orgasm as Spock enters him—this was absolutely delicious. And they linked sexually during the act. Nice, nice, nice.

A bit of a new twist discovered in this older zine. Spock has just completed a mission disguised as a human. Lighter hair. Rounded ears. How would they do that? Certainly not remove those tasty tips? Never mind. Notthe point (pun). You see, looking human causes Spock to be very pensive and curious. He visits public places just to see how people do not react to him.

Naturally Kirk comes along and incites him to curiosity of a different nature. If he were human, he would taste the lips of a certain other gentleman of Terran heritage. And, boldly, he does just that, whereupon he turns away and factually states it is all he may ever have so it must be enough. The real human's blood has begun to sing in his veins and he isn't about to accept that conclusion.

Certainly a different view of "our guys" and a nicely sexy one at that, told in Ms. Gates very factual, no nonsense style, which fits this story well. [4]