Tango is a Kirk/Spock story by Dovya Blacque. 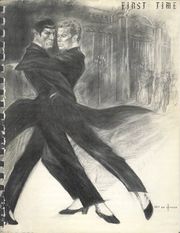 front cover of First Time issue #14, The Southern Cross. An excerpt from the story, "Tango." "The room’s attention was riveted on the dancers. The music ended, a deep throbbing Tango began. Kirk felt Spock’s large hand draw him close as it settled firmly in the small of his back, his other hand grasped him in a warm, long-fingered embrace to the side of their close-pressed bodies. The steps were complex, but Kirk felt as though he’d known them all his life as Spock guided him through them. a pressure here, a shift of a finger there. He wondered at himself, wondered what in all the galaxies he was doing on a dance floor with his Vulcan, male first officer when he was supposed to be representing the Federation... nor did he care to find out. For the moment, all that mattered was that Spock’s eyes were glued to his face and somewhere inside himself, Kirk knew for a fact that this was some form of mating dance, a form that had been abandoned between men on the part of Earth he was from centuries before. It was archaic, exhibitionistic, un-captainly... and certainly un-Vulcan... but he loved it, almost as much as he loved the man who held him in strong arms." 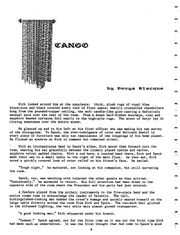 It was published in the print zine First Time #14. The cover of this issue illustrates the story. It is by The Southern Cross which won a Surak Award for 'Best Cover.'

This story was also printed in Shadows in the Rain.

"While at a diplomatic reception, Kirk agrees to dance with Spock after watching him dance with the ruler of that planet."

""Tough night," Kirk muttered, not looking at his companion, but still surveying the room. Spock, too, was watching with interest the other guests as they arrived. "Undoubtedly," he murmured in return. His full attention had been drawn to the opposite side of the room where the President and his party had just entered. "A good looking man," Kirk whispered under his breath. "Indeed," Spock agreed."

I'm not sure if the artwork enhanced the stories or vice versa, but a vivid picture was certainly painted with Southern Cross' magnificent art on the covers. It was very effective having the illo for the first story, "Tango", knock your eyes out before delving into Dovya Blacque's strongly believable story. A suggestion of Kirk and Spock dancing would not have been the most realistic scenario for me, but Dovya's story make them such equals that it comes off more as a blending of their uniquely complimentary personalities rather than the traditional dominant-submissive, leader-follower pattern of traditional dancing and many K/S stories in general. Another reason that I was so strongly attracted to this story is related to my own personal preference when it comes to K/S. I personally have a very vivid imagination (as do most readers) and have yet to see the movie, play, or picture that can match that which my own mind brush can paint. Therefore, I am not as in tune to the highly explicit nature of many K/S stories. There is a difference between explicit and erotic, and "Tango" fits the latter description and yet nothing is sacrificed because we don't have a microscopic description of the differences in Kirk's and Spock's anatomy. Without a doubt, Southern Cross' artwork on the back cover is splendid viewing, with "green-eyed" pleasure. [1]

A What’s so attractive is the utter normalcy of the situation. Nothing remotely feels awkward. Neither Kirk nor Spock put their dancing in question, no macho image, and I like that very much. I love the idea that on Vulcan, to dance is a way to attract a mate, a ritualistic duel without the bloodshed. Totally logical and sensual. [2]

This is a beautiful story, full of strong images and dawning love. I enjoyed Spock's amusement at Kirk's confusion and jealousy at his dance with the president. As K & S were dancing, arms around each other, Kirk's realization of his love for the Vulcan was wonderfully portrayed. Spock's interpretation of the dance among Vulcan warriors was very interesting and helped to make the meaning of their dance even stronger. I also liked Spock's hesitation to be a one-night stand, even for Kirk. A great story from an excellent author. [3]

This is a frustrating story for me. What better scenario than to have the fellows attending a diplomatic function/reception on a planet where they are asked to wear old fashioned tuxedos? Where there's a handsome president, male, who asks Spock to dance with him? Where the dance turns out to be a throbbing, sensual tango? Where Kirk sits and watches his first officer dancing with another man, and a million thoughts go racing through his mind?

All of these events are stunning and wonderful, but I kept wanting more from the story. I wanted a more thorough description of the tango itself, for example, not only when Spock dances with the president, but also when he dances it with Kirk. I wanted to see them more viscerally all decked out in the black and white formal outfits. I especially wanted a more complete understanding of what led up to Kirk's desire to say to Spock, "Will you dance with me?" when he most definitely is not talking about moves on the dance floor!

This is a neat, intriguing story that keeps me turning pages, even when there isn't any more story left! I wish it were at least twenty pages longer. [4]

Kirk and Spock dancing together is always a beautiful fantasy. This time they find themselves at a social function where it is acceptable, even the norm, for two men to choose each other as dance partners. Well, of course it doesn’t take long for them to arrive at the conclusion there is no better partner than the one across the table. This is a loving and somewhat innocent story. Even though their dance ends in one much older and quite unlike the tango, it is very tender and sweet. The depiction of their tango, and then the slow dance, are what’s extra special to me. Spock’s arms around Kirk, Kirk’s arms locked around Spock’s neck. Spock resting his chin on the soft human hair he’s longed to touch. Kirk with his face pressed against Spock’s shoulder. Now, isn’t that a magnificent picture? Who needs music? [5]