KC Con was a series of conventions focusing on Star Trek: TOS and other media fandoms.

They were chaired by Kay Johnson and were held in Kansas City, Missouri.

Back in the mid-80's I went to KC Con in Kansas City Missouri. I was a Dr. Who fan, dressed as Tom Baker, and a friend was a Galactic Warrior, from BSG. So we worked out a little skit for the costume contest, in which the Tardis accidentally materializes on the battlestar, and I was confronted by it's security. I couldn't talk my way out of it and was led off to the brig, with my hand tied behind my back by my own scarf.[1] 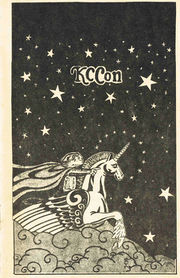 The program book was 24-pages long.

From an ad in Force and Counterforce #3: "Lucasfilm is sending 35mm prints of Star Wars, The Empire Strikes Back and is helping us get a showing at a theatre of Revenge of the Jedi — the first Star Wars triple feature!"

The convention was was held on July 25-27 and was the fourth KC Con. Announced guests were Harve Bennett, Eddie Egan and Mark Lenard. Bennett had to bow out at the last minute due to emergency heart surgery, but did call the convention on its last day. Ralph Winter, a line producer on Star Trek IV, took Bennett's place.

Kay Johnson, who had been involved with the KC Con for many years, had urged me to come for a long time so I could be a part of her annual 'Joan Marie' practical joke. They found out that so many fans named 'Joan Marie' attended the KC Con, that every year, in the autograph session, they would line up all the 'Joan Maries' one after the other. Each in turn would tell the celebrity guests, "and please sign the autograph, 'to Joan Marie".' Kay had enough experience in this by the time I got there to pull off the joke once again, and very successfully.

Among the numerous attractions was a Tribble Breeders Show. My two tribbles took three ribbons (best pedigree: French ruffled Tribble; best construction and Best In Show: Hortribble) and I was ecstatic. I stuck a ribbon on each shoulder and one on top of my head, went around telling people, "Pet me, I'm a prize-winning tribble!" I really make a better kid now than I ever did as a juvenile. I met Roger C. Carmel (Harry Mudd) in the elevator, said the above quote, and he really gave me a pat on the back and said he was glad he'd been one of the judges. He was all smiles and really seemed to be enjoying himself. James Doohan was also a big hit, demonstrating his many dialects and singing movingly in Gaelic, was it? But for me, even better than the stars were the fans. Everybody smiled at each other, nobody made me feel silly because I have a Spock fixation, and I even found a copy of SPOCK, ENSLAVED in the dealers room. [2]