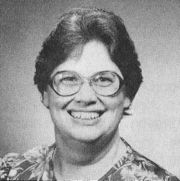 "Kay single-handedly produced the Star Trek Welcommittee Directory for many of its earliest years. This was a huge and comprehensive job, back in the day. The Directory listed all the ST fan clubs, fanzines, and other groups or individuals known to the ST Welcommittee (an organization which helped fans get in touch with other fans or find out what was going on in the days before the Internet). Kay also worked on the KC Con conventions in Kansas City."[1]

Kay edited or contributed to the following Fanzines: 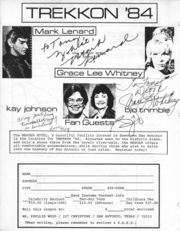 Kay was Fan Guest at Trekkon '84 in San Antonio, Texas.

At the invitation of her good friend Judith Ward, Kay was a fan guest Trekkon '83 at the San Antonio Inn in San Antonio, Texas. She ably and happily assisted in the organization and running of the con. She also read excerpts from some of her published fan fiction. She was officially invited back the next year as a Fan Guest of Honor to Trekkon '84, held at The Menger Hotel. Kay was wonderfully funny and a jokester. She comically inscribed a flyer for con chair Tony Wynn: "To my secret lover, remember that night in San Antonio! Love, Kay".

"Kay Johnson's fan activities and achievements could be adequately catalogued in a good sized "zine" or a small telephone book. For five years she was the publisher of the Star Trek Welcommittee Directory. She is currently the president of Starbase Kansas City, also the publisher and co-editor of the club's fanzine Baselines.

With practically nothing to do, Kay took on the chair of KC Con, a multi-media science ficton/fantasy/Star Trek/Star Wars convention. KC Con II is planned for Memorial Day weekend (May 28-30) in 1983.

Kay admits she flunked her sanity exams long before she had attended over fifty conventions. She was the winner of the Star Trek Fan Fund in 1978, which enabled her to attend the Star Trek Convention in Leeds, England, and as one of the ten fans invited by Gene Roddenberry to attend the world premiere and reception of Star Trek: The Motion Picture, she sold her piano to pay for the plane ticket.

Editor, writer, publisher, fan, Kay says she owes it all to a three year series that NBC still vows nobody watched!"[2]

Kay was the winner of the 1978 Fan Fund and attended Terracon (England). The Fan Fund was "designed to assist a fan in attending a convention of his/her choice, that he/she would otherwise be unable to attend."[3]

The year after Kay passed away, some fans stepped in to try to raise funds to pay her residual medical bills.

"I'll always remember Kay's twinkling eyes, the bear hugs she dispersed so freely, her big beautiful smiles she had for everyone, and the back rubs she received from all of us fans. We loved giving her backrubs. Everyone was special to Kay. I felt like I was the center of her world each encounter I had with her. It was an honor and a delight to be acquainted with such a beautiful person."[4]

"October brought the tragic loss of one of Star Trek's most dedicated, hardworking fans—Kay Johnson. During her 15 years of involvement, this multi-talented woman edited numerous newsletters and fanzines, published the Star Trek Welcommittee Directory for 8 years, and coordinated no less than 6 Kansas City conventions. Known affectionately as "Mama Star Trek," there were few in fandom who could match her boundless energy and outstanding contributions to the world of Star Trek. While attending the beautiful service held for Kay, I could not help but remember the good times shared by all at her conventions, the precious moments of camaraderie her birthday parties always brought, and most of all, those big warm hugs and smiles with which she unfailingly greeted friends. Heaven surely opened its gates at warp speed for this lady. Our deepest condolences to her family and friends. Special mentions go tc the KC Con Committee for their loving support of Kay, to Ruth Reid, whose personal devotion and love knew no bounds during her friend's battle for life, and to Harve Bennett and Grace Lee Whitney, who let Kay know they cared. She will be missed by many for a very long time to come."[5]

"My strongest memory of her is her appearance on ENTERTAINMENT TONIGHT following the preview of ST II in Kansas City. She looked straight into the camera and said, "The fans will love it!" I knew then that I would, too.... The last time I saw Kay Johnson was last year at KC Con. Kay had been trying to get me to go to a K.C. Con for years, so she could include me in her annual "Joan Marie" practical joke. It went like this: at the celebrity autographing session, she would gather all the women at the convention named "Joan Marie" and line them up one after the other. The result would be that Joan Marie #1 would ask the celebrity "please sign it 'to Joan Marie.'" Then Joan Marie #2 would step up and ask the same, etc., until the "Joan Marie's" ran out. Kay thought it was great fun, and the year I was there, Mark Lenard, Ralph Winter and Eddie Egan were laughing as well."[6]