For other articles with a similar title, see Bondmate.

Bigot! Brother! Bondmate! is a slash AU set in the Star Trek: TOS universe. This zine was the winner of a Surak Award. 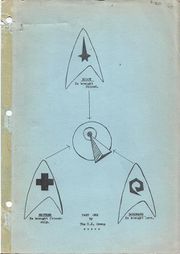 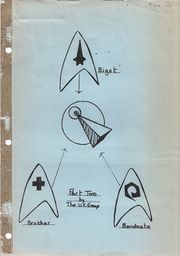 This is a K/S one story zine in two parts. Part one will be available the end of April '86; part two will be available end of June '86. This is an AU story which is both strong in story line & emotion. Those who have read What is Honour? by the U.K. Group will know the quality of the writing. $17 air mail to the U.S. for each part.[1]

The Typewriter in Action

The typewriter for this zine was a rascally one, as can be seen by the title page (see image below).

This zine is also an example of a story that uses a forward stroke -- /—to indicate telepathic dialogue.

At the time, telepathic dialogue in science fiction used italics or, as in Robert Heinlein's Stranger in a Strange Land, ("italicized parenthetical quotes"). Since fanzines were produced on typewriters, the use of italics was impractical. This style, first carried over by Jean Lorrah, was used in fanzines published later -- "Bigot! Brother! Bondmate!" is just one example.

Years later, Jean Lorrah, in her first solo professional novel, also used such marks to distinguish spoken dialogue from telepathic dialogue. When I asked her why she used this indicator without explanation, saying that readers of her books who were not also fanzine readers might not understand this, she replied it was a commonly-known indicator, and that she thought no explanation was necessary.

On the Origins of the Novel

In A 2007 Interview with Fiona James, Fiona explained the orgins of the novel: "[The UK Group wrote three novels]...Starwyck, What is Honour? and Bigot, Brother, Bondmate. They were all round robins....As I remember, I came up with the idea for Bigot, Brother, Bondmate, a situation in which Kirk initially hated Spock because he was Vulcan. Developing a story in which Earth despised aliens even while using their abilities seemed to be an interesting “what if.”"

[The U.K. Group's zines] were written as round robins. There was nothing plotted, just a situation from which the story started, and more than once one of the group threw in a twist that made the next writer do some very creative thinking - which of course kept the story from becoming too predictable. Inside the zines, the names of the writers were put in alphabetical order; in fact the order of writing was D Dubois, Jane Jones, Sara S Reynolds, K S T'Lan, Teresa Hewitt, Ann Kydd, then back to D Dubois. There was a minimum number of pages each one had to write each time the story reached them, but no upper limit. The story went round the group several times, then when it was finished one of the group went through it to smooth out any hiccups that might have arisen from the transfer from one writer to another (there were actually very few).[2]

The different stories form a consistent chronology that takes Kirk and Spock from friendship to love to sexual union. While each story is written by a different author, this zine is basically a novel with multiple authors. While the author is listed in many places as D. DaBinett, Beyond Dreams Press correctly states that the novel had multiple authors.[3] The table of contents list the following contributors: D.C. Dubois, Teresa Hewitt, Jane Jones, Ann Kydd, Sara S. Reynolds, and K.S T'Lan. Artists: Sandra Smith and Virginia Lee Smith.

The fanzine was published in two volumes consisting of 291 pages total. The novel won the 1987 Surak Award for Best Overseas Fanzine. The story was set in an alternate universe where Hitler had won the Second World War. Kirk and Spock's relationship is set against a backdrop of bigotry and racial intolerance.

James Kirk learns the lesson of true devotion and love after being forced to serve in EarthFleet along with a Vulcan officer, with whom at first he is at odds, since during his adolescence heʼd been sexually assaulted by a rogue Vulcan back on Earth.

One of the stranger novels in two parts, great story, but this is a heavy hand creation, typewriter, hand number pages...example of a labor of love. Second it is written by multiple writers but is one novel, so it is a shared story. According to one expert, there are only 200 of these originally created, but no one recorded how many were created officially. Part of the story in vol.1, some of the story was collated upside down. Just part of this very amateur but amazing writing piece.

"He brought hatred. He brought friendship. He brought love," So speaketh the latest zine by a collection of authors calling themselves The U.K. Group. A two-part story totaling about 428 pages, it is a mammoth epic. Where do they get the stamina? Set in an Alternate Universe, we find a Kirk so small-minded, so bigoted, so petty, so blinded by prejudice that frankly, I wouldn't want to be near him in the same room let alone serve with him on the Enterprise. Add the fact that most of the other humans are similarly infected with racial prejudice and you have some idea of the background in which the action occurs.

Part One of BIGOT! BROTHER! BONDMATE! depicts all the hatred, bitterness and bigotry of mankind through the character of Kirk. In turn, the latter expresses all his aggression against the Vulcan who is scapegoat and symbol of oppression. There is much cruelty exchanged - predominantly mental pain and anguish - and it appears that any Vulcan in his right mind would have left long before had it not been for pride, determination and perhaps even ambition. McCoy is one exception - a healer who expresses quite radical views given this unjust society - views that all races are equal and deserve similar access to opportunities in life as one another. Another exception Kyle actually lives out his beliefs in equality by bonding with Spock, until the human's sudden death saves his arrogant Captain and leaves Spock alone once more. Yet amidst the conflict and blindness, there are hints that Kirk and Spock are attracted to one another at a level that supersedes their own individual, conscious desires. This attraction finally focuses all its attentions on the two protagonists in Part Two. Through the unwilling initiation of a dominant/submissive form of bonding called Kh/raen, Kirk submits his will to the Vulcan in order to save their lives. From these uneasy beginnings, a friendship deepens which eventually alters into

love and the bonding of two compatible minds. The zine does not appear to have suffered from having had more than one contributor. On the contrary, it hangs together quite respectfully. Overall, another find [fine?] offering from the Dabinett K/S editorial.[4]