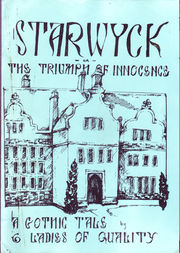 Starwyck is a 241-page Kirk/Spock slash zine written by Doreen Dubois, Teresa Hewitt, Jane Jones, Sara S. Reynolds (aka Fiona James), Martin Sherrif, and Emily Wallace. It was published in the UK. It has the subtitle, "The Triumph of Innocence."

The different stories form a consistent chronology that takes Kirk and Spock from friendship to love to sexual union. While each story is written by a different author, this zine is basically a novel with multiple authors.

The story is a parody of Gothic novels in general and the gay Gothic novel Gaywyck in particular,[1][2][3] and features Kirk as the sensitive, clumsy librarian who comes to work for Spock, the dark, brooding master of Starwyck.

The zine is available online through the K/S Archive: Starwyck.

From One of the Authors

From A 2007 Interview with Fiona James:

Starwyck came about because Companion in America had, as end-of-story “fillers,” some spoof ads for zines, and one of these was Kirk becoming “governess” for Spock’s children. A group of us were having a Trek weekend, and on the Saturday evening someone mentioned this, and people began tossing out dafter and dafter ideas as to how such a story could be developed. One of the group—Ray Newton, as I remember, though she used the name Jane Jones in the UK— was inspired to start a story based on this “plot,” using as incidentals some of the things that had been suggested.

Think of every Gothic tale of romance you’ve ever read. Now think of Kirk and Spock. What you come up with is Starwyck, an early British novel written very much tongue-in-cheek by “Six Ladies of Quality”... Impoverished James Kirk has taken the position of librarian and tutor to the children of the master of Starwyck, Spock Grayson. Little does he know that his greatest trial and greatest happiness await him at that lonely manor house on the moors. [4]

[The U.K. Group's zines were written as a bigger project]. However, when it came to Starwyck, K S T'Lan and Ann Kydd had to drop out for personal reasons, and their places were taken by Martin Sherrif and Emily Wallace. However, during the writing of Starwyck, both of these writers also had to drop out, as did Teresa Hewitt and D Dubois; Jane Jones and Sara S Reynolds did the final quarter of the story between them, still writing it as a 'round robin'. They felt that it reached a natural conclusion after some 240 pages, though if the others had continued it might well have gone on to be a two-part story, the same as the other three titles. [5]

Anyway, there we all were, the wine had been flowing, and even without its help some of us can get high purely on good company, and mention was made of a gothic gay novel called Gaywyck, in which the hero arrives at this mansion to sort out the library for the other hero ... and we began to speculate along the lines of What If... Having finally laughed ourselves to exhaustion and sorted out how many other gothic novels we could rip off, we finally decided it was time we went to bed ... But this was (obviously) not the end of the matter, for a few days later I received the first chapter of "Starwyck" from the pen of the lady who now signs herself NNW, so you can blame her for all of it. Well, that's my story and I'm sticking to it. But you can see within it how Pros was beginning to creep into Trek and how difficult it was for some of us to ignore them. I don't recall who first introduced Elf and Bladesman (I think that's what they were called) but I know that I, for one, fell upon the characters with yelps of delight. [6]

It starts all quite serious: Kirk is a young man on his way to his new job: Librarian and Tutor on Starwyck, the estate of the Grayson family. The master of the house is Spock Grayson, a Vulcan-human hybrid. Spock is married to T'Pring and has two children, T'Brat and S'Od. Their nurse is T'Pau.

The story begins as an English drama: a shy young teacher for the children on a big estate, a dark handsome master of the house who hides a big secret. Some areas are forbidden area for the young librarian. Kirk hears horrible sounds and seas glimpses of movements and suspects all kinds of secrets. Kirk is here a young man, not very brave and rather clumsy. Very romantic, too: he is often in danger, cries for fear and get hurt or faints and is rescued by his employer and of course he is hopelessly in love with him and Spock is equally interested in his young employee. The first part is rather thrilling and serious as I said before. There are some mysterious things which remain mysterious and it takes till the end before you know what kind of mystery is hidden behind the thick walls of Starwyck. Then the story becomes more and more interlard with typical English dark humour. A lots of hilarious moments enlighten the story and are responsible for quite a lot of grinning and laughing aloud. It is thrilling till the end and I will not reveal what that will be. See here the ingredients: A young rather shy Kirk; a dark severe master Spock, a big castle with many dark corridors and hidden chambers; two impossible children; a big mystery; danger for the beautiful vulnerable girl (correction: boy) who is the central character and at the end saves them all. We meet all the characters known to us from the series in a slightly different role: McCoy is the doctor, of course (what else?) Scott is the gardener, Sulu is the Mayor Domo, what Uhura is doing apart from loving Sulu is not quite clear; Chekov is a detective; Chapel is a witch. We even met Cyrano Jones, Harry Mudd, Janice Rand (a whore) and Nogura!

What to think about a circle of writers, writing slash stories for generations already about different fandoms? A part of unravelling the mystery of Starwyck is to put two portraits together to form a pair. To do that, they have to read through tons of slash zines from all fandom hidden in a locked closet: Alexander and Hephaestion, Bodie and Doyle; Starsky and Hutch; Kirk and Spock, etc.... The stories work rather inspiring and I will reveal that in the end there is a big wedding from about 6 pairs.... Mix that with a firm dose of British humour and mysterious shadows and frightening noises and you get a very intriguing novel, very refreshing and a must to read.[7]

Wow. Oh My Gawd. This is one of the funniest things I've read in years! I kept stopping and putting it down so I could hoot and holler and have a total giggle

attack (it's elderly and in rather delicate shape). Imagine K/S as an over-the-top Victorian bodice- ripper, what they used to call a "penny dreadful". And I do mean, waaay over the top. Spock as the brooding, temperamental master of Starwyck, the mysterious estate on the Cornish coast, complete with locked West Wing that no-one is allowed into. And Jim as the delicate young tutor/librarian, hired to organize Starwyck's vast library and to try and teach Spock's two children, who have been let to run pretty much wild for years. Jim is delighted to have this post as it gets him out of the lecherous grasp of Sir Jasper Nogura, wealthy and drunken despoiler of Delicate Young Things.... Our Jim is still a virgin, about 20 years younger than Spock, and Saving Himself for his True Love.... When you find out why the West Wing is all locked up you will die laughing! Several other favourite characters appear in this—Janice Rand as the blowsy village doxy, Chris Chapel as the soothsayer/Wise Woman, McCoy as himself, Sulu as Spock's steward/majordomo. Cyrano Jones as the larcenous but basically good-hearted owner of the Tribble's Arms Inn.... And everybody's paired up with their True Love by the end, hee hee hee—some of those pairings will surprise and amuse ye no end! The scene in the library where a couple of the young gentlemen are snagging lots of extra cushions to sit on, because they're feeling, um, well, a bit...tender, you know, after the night before.... Hee heehee!!! Couple references to shows I've never seen, as far as slash goes, but it doesn't matter, the authors tell you enough to let you enjoy those references too without diverting attention from the main storyline.

This is absolutely frigging marvelous. Ladies of Quality, I salute you!! [8]