On the front cover of the second issue: "The Finest Star Trek Fiction This Side of Orion!" 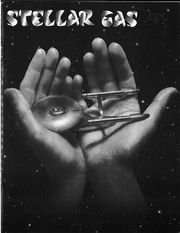 back cover of issue #1, Jim Kuzee

This zine features two novellas. "The Gift" by James Van Hise & Christopher Randolph explores one possible reaction to unwanted immortality, as well as the friendship between Kirk and Spock. "Lost in Thought" by Tracey Alexander — an in-depth exploration of after "The Enterprise Incident."

See reactions and reviews for Lost in Thought.

SG is edited by Jim and Della Van Hise, who also do the semi-pro zine Enterprise Incidents, and has the same slick professional quality. This issue consists of two long stories and several bits of poetry, and if you ever complain of finding the same old plots or no-plots in fanfic, then the sparkling originality of the story lines in "Lost in Thought" and "The Gift" (by Tracey Alexander and Christopher Randolph/Jim Van Hise, respectively [1]), are highly recommended. Imagine a Star Fleet-sponsored mutiny led by Spock, and Kirk a prisoner in his own quarters as part of an elaborate ploy both to save Kirk's life and to avoid Romulan tampering with Earth's past, and you won't be able to put "Thought" down until its unexpected conclusion.

"The Gift" is a curious blend of magic and science, which results in immortality for Kirk and Spock. And that's great, right? But what if they are blown into little bits --- and STILL live horribly. How can McCoy bear it? The interesting solution is a satisfying one, and one I won't give away. To the wide reader of ST zines the whole content of this one has a sexual undercurrent, but so subtle that it is unlikely to give offense to younger readers. I did consider the presence of the two ads for the K*S* zine also done by these publishers to be intrusive, however, since SG has been widely advertised as a G-rated zine. Well worth its cost in entertainment value, at any rate. [2] 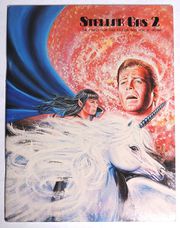 cover of issue #2 by Michael Verina 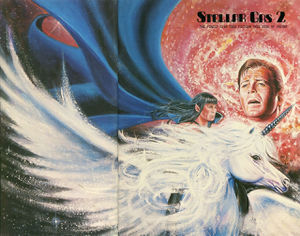 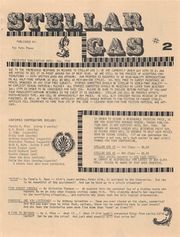 [zine]: Again, nicely produced, professional-looking zine. This one is full of get 'ems and anguish.

[zine]: Della Van Hise has once again presented us with a lovely fanzine. SG2 is quite professional in appearance. It is characterized by the fine attention to detail that is typical of Della's zines. Decorative illustrations and borders throughout the zine serve to enhance the stories and poems. The zine also includes 7 actual photographs. These photos are very unusual such as the the one of Shatner/Joan Collins in their 'City' guises. The artwork by Jaeger, Juzee and LeE is liberally distributed throughout the zine. For the color cover by Michael Verina one can only have praise. His Kirk illo is one of the finest he has ever produced; Spock is exotic and the unicorn is lovely. The artwork/photos alone make this zine worth the modest purchase price of $7.40. The written contents are quite good as well. Humor is prominent in both stories and poems such as 'Hold Onto Your Hat,' which deals with Kirk's driving inability and 'On Striking a Chord' which touches on the effects of strikes in space (strikes as in mass transit type). Other themes well treated within SG2 are the problems of starship captains and Edith Keeler. 'The Murder of James T. Kirk' is a well drawn psychological profile of Spock and the aftermath of 'Amok Time.' 'Time Cannot Console' will ring a tear from a heart of stone. 'Tales My Mother Told Me' is a lovely comparison of the logic/illogic Sarek and Amanda presented to Spock. 'A Thousand Winged Unicorns,' however, is not fully developed and hence rather unsatisfying coming from a writer's of Della's ability. It is a tale dealing with the cover illo. Perhaps the most titillating piece is 'Paradise, Are You Listening?' For all who endured the scorn of non-Trek people, he offers a fascinating explanation as to why Trek and especially Trek fanzines are so captivating... SG2 is a very lovely zine in all respects. It will provide the reader with much enjoyment. [4]

[zine]: Della has a zine that is definitely different. Like any innovative or experimental project, there will be times when it will be questioned, not because it is not worthy but because an individual is not familiar with the format. In some respects, my comments must fall into this category. The zine is attractive, the writing is competent. I liked several things, most especially an excellent filk. The colorful cover is from a painting by Michael Verina. The art of the cover is unique, but quite unlike that of most fanzines. In some cases, the photographs are only marginally related to the text. But SG2 is a frustrating read. Of the 11 stories, all are six pages or less except one. Interesting ideas are presented, but not in depth. Several are fragments, written well enough, but not quite vignettes. With an addition 15 pages of poetry, the zine had an unbalanced feel. 'Peter,' the major story, was good, but it can't quite compensate for this. The appearance of the zine was also affected by the computer-type, which I found clear but distracting, especially the commas. Space was used fairly well, but the inclusion of professional produced filler art, mostly floral in theme, gave unity, but at the same time detracted by giving an un-space/SF/Trek atmosphere to the zine. Somehow, the combination of print and the professional elements removed some of the personal feel most fanzines have. In my opinion, the money spent on the color cover and photographs should have been used to give us one more good solid Trek story. However, Della has arranged for distribution through newsstands, and there is no denying that that lovely cover is an excellent selling point. One is left wondering if this is a fanzine, or a semi-pro magazine. Which ever it is, it is interesting! [5]

And then there are some you buy simply because the covers are batshit insane and you must own the ridiculousness.

Guess what the reason was for this purchase.

Wrap around cover for Stellar Gas #2, art by Mike Verina. And this one isn’t just random “I wanted to paint Spock on a winged unicorn just because.” It actually illustrates the first story in the ‘zine, A Thousand Winged Unicorns by Della Van Hise. I’m not 100% sure what’s going on in the story, but I think this is Jim Kirk’s afterlife. In which case, this is 10,000% better than the version of it he had in the Nexus in Star Trek: Generations, and I am disappointed we didn’t see this on the big screen.