This article is about the graphics used on websites. You may be looking for Bruce Banner, the Marvel character.

A banner is a graphic that is placed at the top of a website or a blog to advertise or draw attention to the page. The term "banner" has therefore both positive and negative connotations within fandom. On the one hand, it is a popular form of fan art, offering a way for fans to demonstrate creativity, artistry and self-expression. However, "banner ads" are used by so-called free webhosting services to generate revenue. Not only, by their prominent position, do such banner ads mar the appearance of the top of the webpage, but the fan owning the site may lack control over their content. 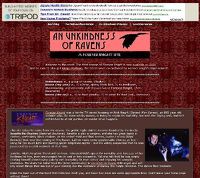 Screen capture of the website An Unkindness of Ravens, showing the banner ad for the hosting site (Tripod) at the top, above the banner for the website itself.

Screen capture of the Links Page from Kristin Harris's Knight Vision website, showing the site banner at the top and an array of link banners from various other Forever Knight-related websites.

Fan-created banners first appeared on early websites and webrings as graphically interesting logos. Usually, such banners incorporate the name of the site, combined with related images such as photomanipulated screen captures and/or publicity stills. More elaborate banners might incorporate links to different parts of the website, thus doubling as a site map. With the advent of journaling sites, such as Livejournal, banners became very popular as headers for fannish blogs and communities.

By extension, the term "banner" is also used for graphics that run horizontally across the webpage in any position. It is common for fan sites to include links to other sites in the same or related fandoms, often on separate "links pages"; and, while these initially simply took the form of lists, fans quickly took to creating advertisement-like banners for other site owners to display. Many fan sites include both a page of link banners for the site in different sizes, colours, and styles for people to pick from, and a separate link page displaying banners from other sites.

Banners are often created in association with fannish awards and contests, and handed out to winners to display on their websites. While many fan sites position such awards towards the bottom of the index page, others have "awards pages" to display banners, usually in a vertical array down the page. Awards banners for specific stories may also be displayed on the page for the story itself.

Banners are also displayed on fan sites to advertise appeals and campaigns, claim attendance at conventions, and demonstrate support for non-fannish enterprises such as charities and human rights organizations.

– insert general description of a banner, size and shape. Any tutorials?
– deviantArt stamps?