A Teaspoon and an Open Mind

A Teaspoon and an Open Mind, or simply Teaspoon is a central single fandom fanfiction archive for the Doctor Who fandom. It includes fanfic from the classic era of the show, the new era that began with the 2005 revival, the spinoff shows Torchwood and The Sarah Jane Adventures, and various other Doctor Who-related materials, such as the BBC novels and the Big Finish audioplays. Teaspoon predates the 2005 revival, having first opened in August 2003.

The title of the archive is a quote from a classic-era episode. The site explains the context and hosts a .wav file of the relevant line.

The archive was the much-improved reincarnation of an earlier and much smaller archive run by nostalgia and was initially hosted and designed by Versaphile before the archive moved to new hosting in 2004. It is currently maintained and administered by a group of several fans, many of whom have worked on the site's administration since the initial move in 2003.

The upgrading/relaunch was largely to fill a perceived need for a central and fandom-specific archive after the loss of Panatropic's archive of stories from alt.drwho.creative. 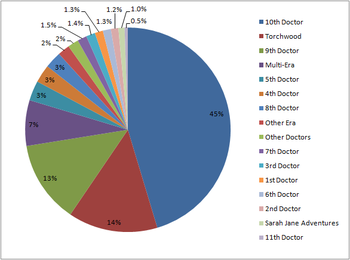 Fics by era. These figures are based on the front page of the archive on April 9, 2010.

Because of the unique nature of Doctor Who's history, the archive is divided by era rather than by source media. In other words, it's organized by which incarnation of the Doctor the fic is about regardless of whether the author is drawing from the TV show, audioplays, books, or other materials.

Teaspoon contains sections for the First through Thirteenth Doctors; Multiple Doctors, Other Doctors (including non-canon, alternate numbered, parody, and original Doctors), and Other Eras; and the spinoffs the Sarah Jane Adventures and Torchwood.

The popularity of the new era of the show is evident: As of April, 2010, the Tenth Doctor section accounts for 45% of all fic on the archive. The Torchwood, and other revival era Doctors are also large. People began to write about the Eleventh Doctor long before he appeared on the show,[1] and show-based fic began to be uploaded within days of Matt Smith's debut.[2]

It allows ratings of All Ages, Teen, and Adult. There are no restrictions on violence and sex or on types of pairings (or lack thereof).

Beginning in 2008, Teaspoon instituted a moderation policy in order to enforce its submission guidelines.[4] All stories submitted are now reviewed by one of a team of moderators before being approved or denied. The submission guidelines chiefly cover grammar, spelling, punctuation, formatting, and the permitted format of summaries.[5]

Teaspoon has an official rec community, Calufrax, for recommending stories available on the archive. The livejournal community Whofic is Teaspoon's news and support community.