Open Letter by Bjo Trimble to Doctor Who Fans

In March 1995, Bjo Trimble sent a letter to various fan clubs in a fan campaign to recruit support to have Gareth Thomas (among other things, Thomas portrayed Roj Blake in Blake's 7) play the part of the new Doctor in Doctor Who.

Trimble also advocated for herself to be guest of honor with Thomas in future events.

This fan campaign wasn't Trimble's first rodeo; she had been a main player in the various, very early Star Trek fan campaigns.

Where the Letter Was Published

It is unknown what Doctor Who fandom venues this letter appeared.

An edited version of it appears in Dreamwatch #9.

One Blake's 7 place of publication was the April 1995 issue of Horizon Newsletter with the introduction: "This letter was sent to the club membership from Bjo Trimble, who asked that we let everyone know about this."

The open letter was also printed in full in Rallying Call #14.

The Text of the Letter 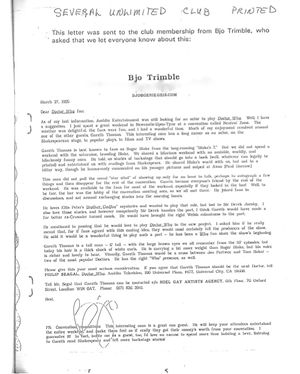 Most open letters are accompanied by a request to be printed in full. This image used on Fanlore has had the home address and phone number redacted.

As of my last information, Amblin Entertainment was still looking for an actor to play Doctor Who. Well, I have a suggestion. I just spent a great weekend in Newcastle-Upon-Tyne at a convention called Neutral Zone. The weather was delightful, the fans were fun, and I had a wonderful time. Much of my enjoyment revolved around one of the guests, Gareth Thomas. This interesting man has had a long career as an actor, on the Shakespearean stage, in popular plays, in film and TV shows.

Gareth Thomas is best known to fans as Roger Blake [sic] from the long-running "Blake's 7". But we did not spend a weekend with the saturnine, brooding Blake. We shared a hilarious weekend with an amiable, worldly, and hilariously funny man. He told us stories of backstage that should go into a book (well, whatever can legally be printed) and entertained us with readings from Shakespeare. He shared Blake's world with us, but not in bitter way, though he humorously [1] commented on his younger pictures and sniped at Avon (Paul Darrow).

This man did not pull the usual "star stint" of showing up only for an hour to talk, and perhaps autograph a few things and then disappear for the rest of the convention. Gareth became everyone's friend by the end of the weekend. He was available to fans for most of the weekend, especially if they looked in the bar! Well, to be fair, the bar was the lobby of the convention meeting area, so we all met there. He joined fans in discussions and sat around exchanging stories into the morning hours.

He loves Ellis Peter's Brother Cadfae [sic] mysteries and wanted to play that role, but lost to Sir Derek Jacoby. I also love those mysteries, and however competently Sir Derek handles the part, I think Gareth would have made a far better ex-Crusader turned monk. He would have brought the right Welsh robustness to the part.

He mentioned in passing that he would love to play Doctor Who in the new project. I asked him if he really meant that, for if fans agreed with this casting idea, they would most certainly tell the producers of the show. He said it would be a wonderful thing to play such a part -- he has been a Who fan since the show's beginning.

Gareth Thomas is a tall man -- 6' tall -- with the large brown eyes we all remember from the B7 episodes, but today his hair is a thick shock of white curls. He is carrying a bit more weight than Roger Blake, but is voice is richer and lovely to hear. Visually, Gareth Thomas would be a cross between Jon Pertwee and Tom Baker -- two of the most popular Doctors. He has the right "Who" presence, as well.

Please give this your most serious consideration. If you agree that Gareth Thomas should be the next Doctor, tell PHILIP SEAGAL, Doctor Who, Amblin Television, 100 Universal Plaza, #477, Universal City, CA 91608.

P.S. Convention committees: This interesting man is a great con guest. He will keep your attendees entertained the entire weekend, and make them feel they got their money's worth from your convention. I guarantee!!! In fact, invite me as a guest, too. I'd love an excuse to spend more time hoisting a beer, listening to Gareth read Shakespeare and tell more backstage stories!

Has everyone heard about Bjo Trimble touting Gareth to play the Doctor in Amblin's production of DOCTOR WHO? I can see that easily, but will believe in a new series of DW when they're doing triple lutzes in hell. [2]

I'm a little perturbed that she misspells (or mistypes) "Cadfael" and misspells (or whatever) "Roger Blake." Yes, good ol' Roger -- My favorite reb!!!!!! Huh? And did she just become aware of Gareth???... What does anyone know about his Who business? [3]

I don't know anything about 'this Who business' but I think Gareth would be great for the part. My other choice is Rutger Hauer. Sad! [4]