Brightstar Universe was a Star Wars fan-created, alternate universe series by Christine Jeffords. At least one of the parts ("Honor's Price") was co-authored by eluki bes shahar.

from the "Brightstar" section of the art portfolio in Far Realms #7, artist is Dani Lane
Its focus was an original character named Mari Sevenstars:

The main character is Mari Sevenstars, a recurring character in Jeffords' 'Brightstar" series. She is an "Azaeli" with—we are repeatedly told--a fierce and sometimes dangerous temperament. Han is her "swordbrother" and she sets about to organize a galaxy-wide search for Han, who is still in Jabba's clutches. [1] 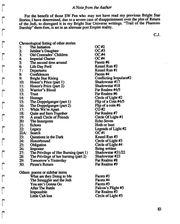 1995 listing of "Brightstar" stories, printed in Bright Center of the Universe #5

In Shadowstar #17 (Winter 1985), the author refers to "Honor's Price" as "part one, from The Pirate and the Lady series by Christine Jeffords." It is unknown if this title was an early or alternative one for the entire series, or for a cycle within the series.

The stories were written due to "the severe disappointment over the plot of the Return of the Jedi" [2]; the plot is disregarded in this series.

By the time "Legacy" sees print, most of its readers will have seen THE RETURN OE THE JEDI (as the author anticipates having done also). But, like various other fannish Universes (the Thousand Worlds of Maggie Nowakowska comes immediately to mind), the Brightstar Cycle, of which "Legacy" is a pivolai part, remains valid and "true" despite any revelations made in The Movie.

Like the preceding Brightstar chronicles, "Legacy" takes place in an alternate and independent SW Reality, preceded by the events of ANH and TESB as we saw them on the screen. The reasons for its "parallelism" should become quickly apparent to its readers, and will not be enumerated here. It is the take-off point for all future Brightstar chronicles, of which several are planned.

A description from Far Realms #7:

The Brightstar Universe (based upon The History of the Rebellion: An Human Overview compiled by Artan Brightstars, Singer to Clan Phonthon-Azael, at the command of his path'andim, Mari Sevenstars) diverges from the George Lucas timeline immediately after TESB, and continues to a point about 45 years after Brightstar in Glory, its analog of ROTJ. It also includes a number of stories set before ANH and between ANH and TESB. A total of fifty-odd tales of varying lengths, plus a few poems, are included; of these about thirty have been published or accepted as of this writing. (October, 1984).

The major created characters of the Brightstar Universe— Mari Sevenstars, space pirate and Alliance privateer; Skye Amberson, fugitive Jedi; Jerim Lornay, Alderaani nobleman and undercover courier; and assorted Free Spacers, New Jedi, and Imperials—interact constantly with the Lucas group in a story-series in which the chief differences from the Gospel include: (1) that Luke and Leia are not related and never haVe been (2) that Han is not in love with Leia and does not marry her (3) that Darth Vader and Skywalker Sr. were two different people (4) that Han was never in service.

Plans are afoot to publish the entire Brightstar Cycle as a special multivolume item from the author's Phantom Press. Watch your local adzine for news.