First off, there's really nothing wrong with your copy of this zine. Ronile Stevens' story, "Phoenix: Rising," [was] to have been illoed by Lin Stack, was cancelled when the artist, who also happened to be the author, gafiated. Abruptly. So that's why there are pages "missing," and that's also one of the primary reasons for the delay. I won't offer the others to you; there's no point in all of us sitting around sobbing and tearing out our hair.

There aren't any more delays. This sucker's done, and no one's more glad of that than I!

I've had some inquiries about a second ish. I've had some offers of contribs for the second ish. With sufficient interest, I'll tackle Echo Seven 2. That means, obviously, I haven't really learned as much about zine-editing as I like to think I have.

From an ad in The Old Republic Reader #7: "'Never to Hear the Wind' will not, as was previously advertised, be published by Polaris Press. Instead, it will be appearing in ES #1, with a 'Brightstar Universe' story by Christine Jeffords and a 'Starbird's Children' story by Kathryn Agel. Others include Wortham, Lybarger, Dodd, Vandiver, Bes Shahar, Jenni, Hawks, [Barbara T.], Stevens, Taero, Sansom, Boll, Stack. $5 and SASE to reserve. Hoping for a July publication." 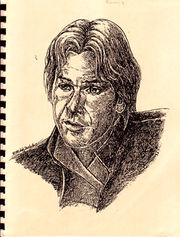 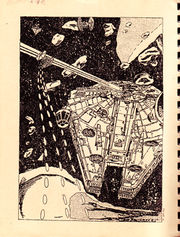 Prufryddirm: There are no typos in this zine, only lapses into Corellian...or Azaeli...or Wookiee...or something for which we aren't responsible....