Conflicting Impulses is a multimedia fiction anthology. An ad in Datazine #28 says it "continues where Slaysu left off."

The Second Issue is Two Zines

The second issue of "Conflicting Impulses" contains the contents of the zine Archaeology 101 #3.

The editor explains: "I came up with the idea several weeks after committing myself (Hello, Bellvue?) of putting them "Jack and Jill" styles-back to back. Not only does this mean no back cover, but only one record of who bought what, etc. This also gives you collectors a break in the price, since printing costs are lower in one job compared to two."

Conflicting Impulses 1 was published in 1983 and contains 221 pages, non-reduced. The second issue of this zine is a flip-over edition with another zine attached when you flipped the zine over and turned it, this one, #1 is not; it's just a regular fanzine. 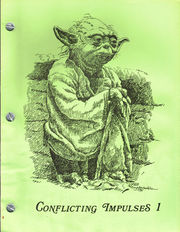 This is actually comprised of two zines: the second issue of "Conflicting Impulses" and the third issue of "Archaeology 101 .

Conflicting Impulses 2 was published in May 1985 and contains about 150 pages. It was edited by Kathy Retz. 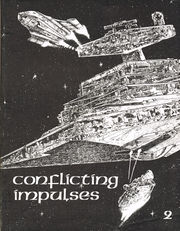 cover issue #2, the "Conflicting Impulses" #2 side, artist is Elizabeth Hoolihan
From the editorial, Kathleen Retz:

I saved enough money in two months to afford a trip to MediaWest*Con V, where this zine is premiering. The Star That Beckons was actually the first story finished instead of the last this time. The Simon & Simon story had the honors to be last. 1 certainly hope the wait was worth it. My proofers thought so.

As I'm sure you noticed as you flipped through this, five out of six stories are illustrated. Not bad, huh. Sometimes I amazed even myself. Uh, sorry about that. where was I? Oh, yes, the pretty pictures. Elizabeth Hoolihan did a magnificent job as usual on Christine Jeffords story. Her battle scene illo was so nice, I had to use it for the cover, didn't I? Those creepy illos for "Magnus Effect" are mine. They're as silly as the story. A hearty welcome to a new artist making her debut in this issue: Meredee Byron. She lives here in San Diego and is really interested in doing more art for zines. [...]

About the stories. "Brightstar Rising" is the first story in the cycle by Christine Jeffords. This was supposed to go in SLAYSU 5, then CI #1, then I swore it would go in this issue. I just didn't expect two years to go by. But it's out now, and I hope you'll like it. It's always fun to actually find out what all those snippets and hints about the past are really about. To think I've been the only one for three years to actually know most of those things....

"The Magnus Effect" will, alas, be the last of the Eurasian stories in amateur publication, although there are three others to be rewritten and three others in the outline stage. These stories were originally written eleven years ago when I first started out. I rewrote them for SLAYSU and CI and enjoyed improving on them. It's just that I decided to go one step further. They will be rewritten again with all references to the Star-Trek universe (ie. Vuleans, Federation, etc.) removed and all original characters replaced. Kirsten and Kendra Ashe will become twins, Salek's name and race will change, the Federation will become a younger intersteller alliance, and the Irquiri will be fleshed out more. I am hoping to then sell them professionally. I'll certainly let you know when this happens and where they will be. Do you think it's possible?

Simon & Simon. I will never, ever, not even at the threat of destruction of my VCR, write another story with "Kathy" as a character (except Kathy Garring, she's got a long history ahead of her). Do you know how confusing this is? And by the time I finished writing the second half, I wasn't working at Lino's anymore, Sally had married and moved to Pakistan, all but one of the waiters mentioned in the story were also gone. And believe it or not, the story was slighty propnetic in its conclusion. And I have changed. Getting away from Lino's gave me the opportunity to mellow out and unwind. I am no longer as high-strung as '. was in the story. And Shirley is not as dippy. But everything else is the same.

Now don't anyone bitch after reading the next chapter of The Star That Beckons. It's the longest, so it should make up for the long delay, but a lot is happening. This is a turning point in Thomas' life, so pay attention. And, no, Thomas is not based on a real flesh and blood person, so stop sending proposals. Besides, I have first dibs on him! 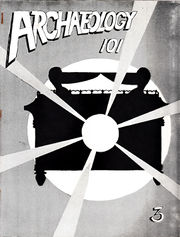 Archeology 101 #3 contains 40 pages. It is not a separate zine, but instead part of the zine "Conflicting Impulses" #2.

It was edited by Kathleen B. Retz and Shirley "Ty" Barrett, the latter gafiates in her editorial.

From the editorial, Kathy Retz:

Well, I can't believe it! It's the night before going to press, only 7:40 pm, and all I have left is this, page numbering, and the Contents. Mark this down, folks— it's a first!

If you don't know already, this is Kathleen Retz talking to you, live, from sunny San Diego, stepping in for Ty Barrett as editor of this tome. Shirley gets her two cents later, now it's my turn.

I had my doubts about taking this. I mean, it takes me two years to get one zine out, how the hell am I supposed to get two out? I came up with the idea several weeks after committing myself (Hello, Bellvue?) of putting them "Jack and Jill" styles-back to back. Not only does this mean no back cover, but only one record of who bought what, etc. This also gives you collectors a break in the price, since printing costs are lower in one job compared to two. Okay, next was deciding what I would change... Surprisingly little. Oh, sure, the layout will look different, but all the material was already chosen and typed, so all I did was coordinate the artist and my schedules and did the physical labor. The next issue will be all me. Let me know if you like this idea. It's this or A-101 included within the covers of CI. This is not that more work, in fact it's kinda fun as well as original.

Please don't let this zine peeter out. Next issue will have the conclusions of two stories and the start of another one I've been working en. Please submit! I don't want to be the principle writer anymore, I want be be an editor. Besides, I'm writing a book this summer as soon as this goes to press so I don't have time to edit and write zine stuff. Gimme, gimme!

From the editorial, Shirley "Ty" Barrett:

I have been asked to jot a quick editorial for Archaeology 101. For any of you who have wondered why I've dropped out of fandom, I'll try to explain. Mainly, it began to take up too much of my time. All I'd do each day was go to work, come home, work on the zines, and go to bed. Now for some editors this may have been enough. For me it wasn't. I found I was getting lost in the fantasy world. I wasn't doing anything for me. It was either for the customers at work or else the eager readers. I wasn't accomplishing anything in my life. Some of you may think that's selfish, I call it looking out for numero uno. And in the long run that's what we all have to do because no one is going to do it for us.

The following people have either original art or stats with me. Please SASE me for further info or send an envelope (8. x 11 will do) plus adequate postage for their return: [list of people and addresses redacted] Unless stated, art is original, not copied or stats. If you aren't sure of what art you have with me, please SASE. I will not pay for any postage out of my own pocket. I cannot afford to do so. I will not send anything back UPS since I no longer live near them. Any items not claimed by the end of June 1985 will be tossed out. If any of you reading this have any contact with someone mentioned here, please pass this message along in case they don't read it. As of the above date I will no longer be responsible for art left with me.

Fandom was fun while I was in it. Aside from the financial and time-consuming aspect of it, I was recently made aware of another reason why I dropped out. With the special release of all three SW movies together at selected locations, a fan was quoted as saying, in regards to waiting in line for the films, "It's like waiting to see God." When the border between fantasy and reality is indistiguishable, when all perspective is lost, it's time to reevaluate things and wake up. Movies are movies, mere entertainment, not gods, and neither are their "creators." Mortal men, as capable of error as any flesh and blood being, not people to be praised on high like some holy diety. You might as well worship television, Sony, Quasar, GE. Each person is his or her own god (small "g") and no one should worship another because you are no better or worse than the person next to you, myself included. Keep all things in perspective and do what's right for you if it doesn't harm another. --Shirley

[Kathleen adds: Whoa, I didn't read that until I typed it just now. I knew she felt this way, but not quite this strongly. Don't worry folks, she still likes going to movies, she's just not into "active fandom" any longer. Having known her for four years, I saw this coming a long time ago. Well, this is all the blathering we're going to do, turn the page and enjoy!]