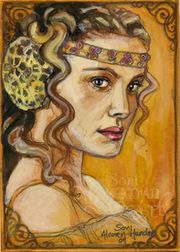 Padmé Amidala is a Star Wars character. She served as Queen of Naboo, leading her planet's liberation from the Trade Federation invasion, before serving as representative for Naboo in the Galactic Senate until her death at the hands of Darth Vader. She is the mother of Luke Skywalker and Leia Organa.

She is portrayed by Natalie Portman in the prequel trilogy and voiced by Catherine Taber in The Clone Wars.