Mara Jade is a major character, and one of the main protagonists, in the Star Wars Legends tie-in novels. Created by author Timothy Zahn, her first appearance was in the 1991 novel Heir to the Empire.

A fan favorite--particularly among female fans--Mara Jade was the only non-movie character to make the top 20 in a 1997 Star Wars Insider poll.[1]

Mara Jade has not appeared in the Star Wars sequel trilogy or the new Expanded Universe, and is not considered canon in the new continuity. Despite this, the possibility of her return has been wildly debated in fan circles, especially after a similar re-introduction of Legends favorite Grand Admiral Thrawn and use of the title "Emperor's Hand" in Star Wars Rebels.[2] After Lucasfilm reportedly issued a casting call for a female lead age 40-50, named Mara, many fans speculated it meant a character with that name would appear in The Rise of Skywalker. [3] However, Keri Russell's character in the released film was the smuggler Zorii Bliss, with little or nothing in common with Mara Jade.

The appearance of bathroom graffiti at the Star Wars Galaxy section of Disneyland in September 2019 proclaiming "MARA JADE LIVES" further fanned the flames, as its origins were not initially clear.[4][5] It was later confirmed to be the work of an anonymous fan and not an officially sanctioned Easter egg as many outlets initially reported.[6] 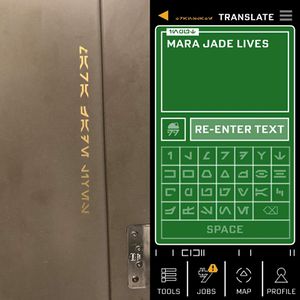 Fans had mixed feelings about this "graffiti" at the Star Wars: Galaxy's Edge attraction ostensibly teasing the return of Mara Jade to canon.

Fan reactions to the continued rumors around Mara's return to canon have been mixed. Many were excited, but others were ambivalent or even outright hostile at the prospect.

I regret saying i wanted Mara to be in the sequel trilogy movies. After seeing what they did to Luke in TLJ, i don’t want Mara anywhere near canon Star Wars. They would make her into a brunette and take away her sass and fiery personality. [7]

If she comes back, I want it to be a Mara I can appreciate. If Mara returns, she deserves to be important, not a hastily-thrown together appeasement. I want her to matter in the new canon just like she did in the old. And yes, I’d rather wait and see her done right – or not at all. If it only happens in fan fiction, well, so be it.[8]

You have to understand, Mara was the first female Jedi in canon. Leia may have been Force-sensitive and received some training from Luke, but the authors of the Legends timeline and the current screenwriters for the new movies have never allowed her to become a full-fledged Jedi. Mara was the first female Jedi in Star Wars canon, and characters like Ahsoka Tano and Rey are following in her footsteps. A lot of us female fans who didn’t grow up watching The Clone Wars or were already adults or already long-time fans by the time TFA was released, we looked up to Mara for that.[9]

I think one of the things I’ve always loved about Mara Jade is that she has always been her own character and had a life outside of Luke Skywalker. Gaeriel Captison, Callista Ming, Nakari Kelen and so many other female characters in SW novels were created for the sole purpose of being Luke’s love interest, but not Mara. Mara had a life and a history before and after meeting Luke; her entire existence in the books was not defined by him. I think that’s a big reason why she was such a fan favorite for so long.[10]

I more than understand that the books will always have lower profile for much of fandom, even back when they were (arguably) canon. Hell, that’s part of the reason I started a blog on this site – because back in 2004, the other fansites simply weren’t covering them as much as I thought they could. But I can also say that Mara is a huge reason I got into the fandom in the first place. And Mara was a large part of the reason I kept reading, which is why I stayed in fandom. [11]

I don’t understand why we’ve never had a novel where we solely followed Mara Jade around. She’s the total package of a female character and could definitely hold down a book of her own. She is intelligent, independent and powerful which are all qualities I would like to see in the female Jedi that are included in the Sequel Trilogy. Why invent a new character when the perfect one already exists?[12]

Mara Jade is frequently depicted in a black catsuit in both official art and fanart (usually, but not always drawn by male artists). However, many female fans have a strong dislike for this outfit, and prefer other costumes for Mara - either Jedi robes, or more practical smuggler's garb similar to Han Solo's. She may also appear with a scarf and goggles, or disguised as "Arica" in a skintight blue dancer's outfit.

Sometimes I think the saddest thing bout Mara Jade not being in canon is that we’ll never get a DECENT cosplay option for her. [13]

When she serves as the Emperor's Hand, Mara's lightsaber is purple. After the defeat of Grand Admiral Thrawn, Luke Skywalker later offers her the blue lightsaber that originally belonged to Anakin Skywalker, which she accepts and uses thereafter. This is a popular trope among shippers for this pairing. In fanworks where Mara constructs her own lightsaber, it is usually one of these two colors.

As in canon, Luke Skywalker is the most popular partner for Mara in fanworks. Shipping fics frequently show her as rival to or jealous of Luke's other love interests, particularly Callista Masana. However, Mara is occasionally shipped with other characters such as Lando Calrissian. Femslash with Mara is relatively rare, and she is usually paired with Leia Organa in place of or in addition to Luke.

i feel like there are a lot of instances in the eu where mara could have potentially developed a relationship with someone before luke but things did just not work out for her like that. but also she definitely had sex before luke bc fuck that virginal bride nonsense. [14]

37 year old virgin Mara is not my head canon either. I could see her doing some version of trusted acquaintance with benefits (not friends that would be messy) and maybe a few flings that were heavy on the physical connection. I do think anything with a potential for heavy emotions would scare her off though.[15]

Fanworks also show Mara considering smuggler chieftain Talon Karrde's organization as family, particularly Karrde and the awkward slicer Ghent. Depending on the fic, she may have strong friendships with Leia Organa and Han Solo, or they may be suspicious of her Imperial past and discourage Luke from pursuing a romantic relationship with her. Mara is especially close to Jaina Solo and frequently serves as her mentor in Jaina-centered fanworks.