From Fanlore
(Redirected from S.a.s.e.)
Jump to navigation Jump to search 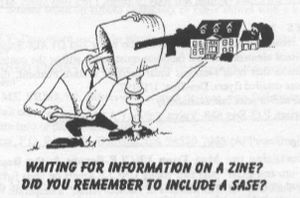