Pretty Good Convention was a media con held at the Lansing Sheraton in Lansing, Michigan. 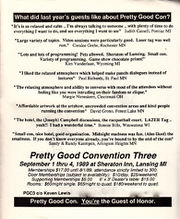 There were at least three of them.

"Pretty Good Con. You're the Guest of Honor."

From an ad in Pop Stand Express #16: "September 4-7, 1987, Sheraton Inn—Lansing, Michigan. A Pretty Good Con gives you a chance to come and have four days of fun with friends that you haven't seen all summer long. [1] We're not a World Con or NASFiC. We're a media oriented convention. MediaWest*Con is getting pretty crowded, so we're holding a second convention in Lansing...with the Carleton's assistance. We're also a non-profit organization. By law, all membership profits must be used for the convention. Which makes for a really good convention for you. We've got Pretty Good Features: A real movie theatre (where we will be showing all three films in the Star Wars trilogy, 50 dealers room tables, art show run by four-time MW*C veteran Karen River, Costume Competition and Masquerade Ball, Discussion Panels, zine reading room, Function rooms available for member receptions and parties. Memberships: $17.50 before 3/31/87, $19.50 from 4/1 to 6/30/87, $21.50 from 7/1 to 9/1/87. Contact: PRETTY GOOD CONVENTIONS, P.O. BOX 602, OKEMOS, MICHIGAN 48864. Staff includes: Keven Lewis, Paula Smith and Karen River. Be sure to include a SASE if requesting information or flyer."